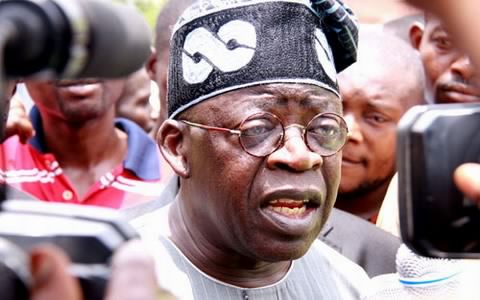 PDP will not win any seats in Lagos council elections – Tinubu

A chieftain of the All Progressives Congress, APC, Bola Tinubu, on Wednesday said that the Peoples Democratic Party, PDP, would not record any victory in the forthcoming council polls in Lagos State.

Mr. Tinubu, who regretted the loss of some national and state legislative seats to the PDP in the 2015 general elections, said the election was a great battle.

The former governor of Lagos State made this declaration while addressing party members at the Lagos State APC Stakeholders’ meeting, held at the party secretariat at Acme Road, Ikeja.

“2015 election was the greatest battle of our time,” Mr. Tinubu said.

“In the last election, we lost more than three LGAs to our opponents, which is very unusual.

“We have asked our leaders in those local governments to examine what went wrong and work together to chart a new course to ensure the APC wins back those councils.

“PDP cannot have any share in these council elections,” the APC chieftain noted.

Mr. Tinubu commended party faithful for their support to Governor Akinwunmi Ambode’s administration, adding that the governor had not disappointed the party and the people.

“We are grateful to you the people for your great support during the 2015 election. We have continued to hold Lagos in spite of strong opposition.

“Governor Ambode has not let us down; he is doing a fantastic job in an environment where we have the economic challenges. He is doing it and he is doing very very well.

“He has a very good team. He is doing a great job and we are very proud of that,” he said.

According to Mr. Tinubu, the party will not use any of the current sole administrators in the forthcoming council poll.

“To appease some people, we asked the government to allow the Executive Secretaries to take over after the tenure of last council chairmen expired, instead of civil servants.

“That was why executive secretaries were chosen to pave way for politicians.

“When the term expired, we used sole administrators, but before we used them, we warned them that `when the elective position comes, you are not entitled to contest’.

“We agreed that time, we cannot change it overnight; executive secretaries, however, can contest.”

The APC leader, however, said 19 former council chairmen, except for one of them who is late, who only served single terms, would be given another chance in the coming elections.

He urged the party leaders to give consideration to youth and women in the sharing of positions.

In his address, Mr. Ambode urged all stakeholders to work together to ensure APC victory in all the 57 councils.

“We are meeting on a very happy note,” he said.

“I am able to look back and say that that confidence you reposed in me to defeat the PDP candidate was not in vain.

“This coming local government election is all in your hands. My call to all members of our great party is to ensure that all the 57 councils are won by APC.

“We have begun a journey to make Lagos and Nigeria progressive,” Mr. Ambode said.

The council poll is slated for July 22.