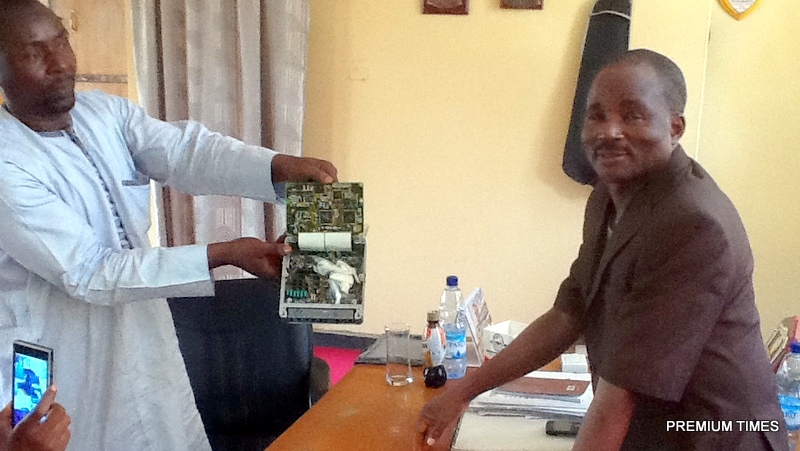 Right: Mr. Yakubu Kibo, Commander , NDLEA Adamawa command displaying a cracked cocaine concealed in a car brain box and was seized by the men of the command in Yola ,with him is a staff of the command.

The Adamawa State Command of the National Drugs Law Enforcement Agency (NDLEA ) has confirmed the arrest and successful prosecution of a notorious cocaine dealer, Ahmed Buba, popularly known as ” Ajebo”.

Mr. Buba was nabbed with 13.9 grams of cracked cocaine.

Yakubu Kibo, the state commander of the agency, confirmed the development to journalists in Yola, the Adamawa State capital.

Mr. Kibo described the arrest as first of its kind in the history of cocaine seizures in the state, saying the drug kingpin, after his arrest, was charged to the Federal High Court, Yola, on April 12, 2017.

He was convicted and sentenced to five years imprisonment without the option of fine, the NDLEA official said.

He said the agency conducted intensive laboratory test and that the substance found with Mr. Buba, was confirmed to be cocaine mixed with Soda Bicarbonate.

Mr. Kibo said the drug dealer was arrested in Yola town, in front of Modibbo Adama University of Technology Distance Learning Centre with the illicit drug concealed in a car brain box.

He said his agency trailed the kingpin for six months following intelligence report on his activities.

He said after thorough investigation and search of his home at Wuro-Chekke ward in Yola South Local Government area , the kingpin admitted to have been in the illicit business for the past two years.

He described Mr. Buba, 37, as the main source of cocaine supply to many higher institutions of learning in the state.

The commander said the kingpin had wasted the lives of many innocent youth in the state who he said became addicted to cocaine.

“Ahmed Buba has confirmed to the command that the source of his cocaine is from Abuja,” Mr. Kibo said.

He warned that the command would not relent in its efforts of ridding the state of hard drugs.