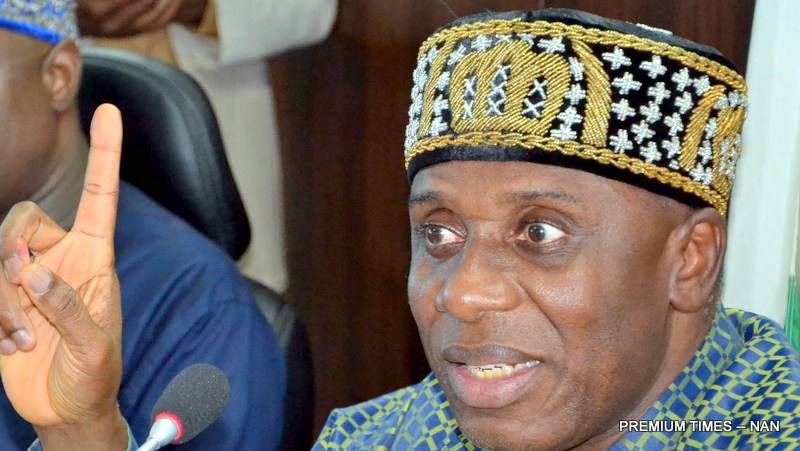 PIC. 7. MINISTER OF TRANSPORTATION, MR CHIBUIKE AMAECHI (R) AND DIRECTOR-GENERAL, NIGERIA MARITIME ADMINISTRATION AND SAFETY AGENCY, MR DAKUKU PETERSIDE, AT THE SUBMISSION OF THE REPORT OF THE MINISTERIAL COMMITTEE ON MODALITY FOR THE ESTABLISHMENT OF THE NATIONAL FLEET (SHIPPING LINE), IN ABUJA ON MONDAY (20/6/16). 4482/20/6/2016/BJO/NAN

The Minister of Transport, Rotimi Amaechi, has threatened to sue a former aviation minister, Femi Fani-Kayode, and Lere Olayinka, an aide to Governor Ayo Fayose, for allegedly naming him as the owner of the Lagos apartment where over N13 billion was found last week.

Mr. Amaechi, through his lawyer, Lateef Fagbemi, informed Messrs. Fani-Kayode and Olayinka in separate letters dated April 14 that some comments they posted on social media amounted to defamation.

The letter to Mr. Fani-Kayode was addressed to his home in Abuja, and it detailed the former Minister of Aviation’s alleged defamatory statements.

“The attention of our client has been drawn to your tweet posted on your Twitter timeline (@realFFK) where you claimed that:

“The $43 million is Rotimi Amaechi’s. He owns the flat it was found in too (sic). NIA story is fake news! NIA does not keep cash in Minister’s flats”.

Mr. Amaechi’s lawyers said the claims as uploaded by Mr. Fani-Kayode were “blatantly false, malicious and aimed at impeaching the credit” of the minister, who’s also a former governor of Rivers State.

“Our client neither owns the cash nor the house where the cash was found and your story and claim are unfounded.

“As a matter of fact, our client does not own any house in Lagos State not to talk of keeping cash in one and your story is preposterous,” the lawyers said.

Consequently, they demanded that Mr. Fani-Kayode apologise for his alleged offences within seven days or face legal action.

To avoid a defamation suit, the lawyers also said Mr. Fani-Kayode must publish his retraction on five national dailies and pay a compensation of N500 million to Mr. Amaechi

In his letter to Mr. Olayinka, which was address to the government House in Ado-Ekiti, Mr. Amaechi maintained that there was no truth in the allegations that he owned the apartment where the money was found in Lagos.

Ms. Abudu had also denied that Mr. Amaechi paid for an apartment for her inside the Osborne Towers where the money was found.

As a result, the lawyers demanded that Mr. Olayinka must apologise to Mr. Amaechi, issue a retraction and pay a compensation of N750 million to Mr. Amaechi for allegedly defaming character.

When contacted, Mr. Fani-Kayode said he will respond to Mr. Amaechi’s demand at the appropriate time.

“We have been inundated with calls concerning about a threat by Rotimi Amaechi to sue Chief Fani-Kayode for defamation over the 43 million USD issue.

“We have not received any court processes or letters from Amaechi but when we do so our lawyers will respond vigorously and appropriately,” Mr. Fani-Kayode’s spokesman, Jude Ndukwe, said in a message to PREMIUM TIMES Monday night.

Mr. Olayinka also said he didn’t receive any correspondence from Mr. Amaechi’s legal representatives, but that he would carefully study any notice of demands and react thereafter.