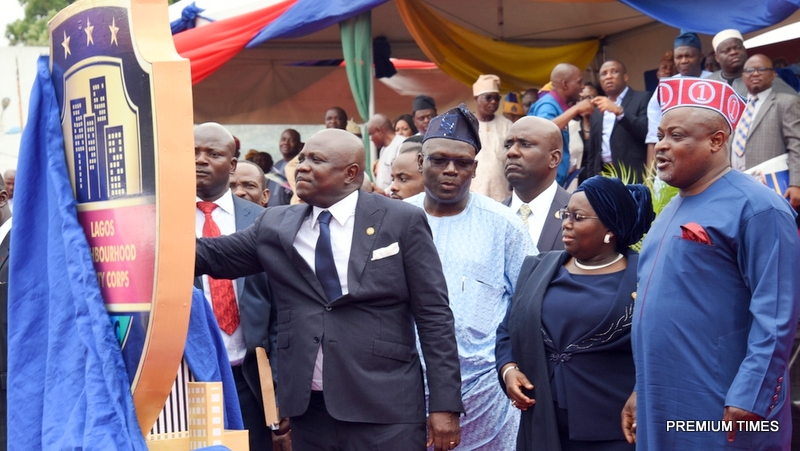 Lagos State Governor, Akinwunmi Ambode, on Monday launched the rebranded Lagos Neighbourhood Safety Corps, with a pledge that the security of lives and property in the State is non-negotiable.

A total of 177 salon cars and vehicles equipped with communication gadgets, 377 motorcycles, 377 helmets, 4,000 bicycles, metal detectors for ensuring that illegal weapons are not smuggled into public places, among other operational equipment were handed over to the Corps by the governor.

Speaking at the official launch held at Agege Stadium, Governor Ambode said the move was another giant step towards enhancing security all over the State and a vital part of the ongoing efforts of his administration to reform the security and justice sector.

The governor, who on August 15, 2016 assented to the law that created the Neighbourhood Safety Corps, said the Corps had been designed to provide a second layer of policing in order to ensure that the state and communities are more secure.

He acknowledged the fact that the Nigerian Police had been very supportive to the State Government especially in fighting crime, but that the need for the Neighbourhood Corps arose from the identified security challenges confronting the State due to huge population, adding that the members of the Corps would complement police especially in areas of community policing.

“Let me, however, make it abundantly clear that the Neighbourhood Safety Corps is not in any way in competition with the regular Police Force.

“In actual fact, they are expected to assist and complement the Police by providing useful intelligence for crime prevention and to facilitate the arrest of perpetrators of criminal activities in our communities,” Governor Ambode said.

He added that in realisation of the fact that nothing can be more important in law enforcement than educating the people in charge of enforcing the law, the rebranded Neighbourhood Corps have been trained and equipped with the requisite knowledge and skills to complement the good work of the Nigerian Police.

He said in addition to the induction on orthodox community policing techniques, the Corps were also trained on how to mediate disputes and the art of negotiating for peaceful resolution, balancing communal interest in resolving disputes and proactive policing engagement instead of reactive policing.

“Special hotlines have also been created direct to the Executive Secretary and senior management of the Neighbourhood Safety Corps Agency for easy communication with our communities in the event of any crime.

“Any valuable information given to the Corps will attract handsome rewards from the State Government. I therefore call on all Lagosians to join hands with us to say a final NO to crime in our State.

“All these equipment have been made possible through the judicious use of taxpayers money and funds from the State Lottery Fund for good causes. Please continue to pay your taxes for a better Lagos.

“I am very happy to state that through this Safety Corps initiative the State Government has created over 7,000 jobs for officers of the Corps, artisans and other support staff. Job creation is at the heart of economic prosperity and we remain fully committed to a more prosperous Lagos for our citizens,” the Governor said.

The governor, however, charged the Corps not to indulge in brutalizing citizens, but that they should exercise restraint, patience, understanding and maturity while carrying out their duties.

Besides, the governor said in order to further strengthen security, a new executive bill to regulate employment of domestic workers and security guards would soon be forwarded to the State House of Assembly, explaining that the bill, among others, will prescribe regulations for the set of workers and other details to monitor their activities.

While noting that there is no room for child abuse or under aged workers, Governor Ambode said it had been discovered that domestic workers were largely undocumented and pose a grave security threat in the State.

He also said the recruiting agencies, under the bill, would be licensed and regulated to ensure safety.

Earlier, the Commissioner for Special Duties and Inter-Governmental Relations, Oluseye Oladejo, said the launch of the Neighbourhood Corps and the handing over of several equipment to the agency was an eloquent testimony of a visionary government which had decided to move ahead of emerging challenges of crime.