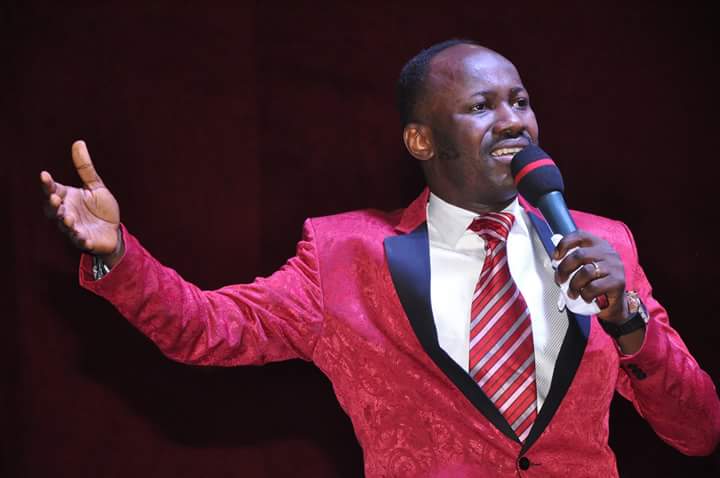 In a statement issued by the Directorate of Media, the church said commentaries on the matter had overstayed their relevance and the members should no longer allow themselves be distracted by it.

“It has become imperative that we advise all Omega Children and Christians Worldwide to put an end to the ongoing media war that we have engaged in,” the church said in the statement seen by PREMIUM TIMES.

“Every wise person would know that this is not a battle of humans but one between the Kingdom of God and that of darkness.

“Therefore, nobody is permitted further to issue a statement or comment on the matter. All Facebook Live Videos on the issue should also stop forthwith. It is advised that we spend our time concentrating on more relevant issues that bothers on the Kingdom.

“We are well aware were all these are coming from and we will deal with it spiritually.”

The statement came just as a second lady, who identified herself as Queen Esther, came forward on Sunday to speak about an alleged sexual relationship with Mr. Suleman (popularly known as Apostle Suleman).

For the most of last week, Mr. Suleman and a Canada-based singer, Stephanie Otobo, traded accusations over allegations of sexual affair, forceful abortion of pregnancy, and breach of marriage promise.

Mr. Suleman had denied the allegations.

But in several videos posted online by Celebration TV, the church’s television arm, Mr. Suleman told his congregation that those behind the allegations would be destroyed within 24 hours.

One of the videos was uploaded on You Tube on Saturday.

“God just told me something. And in 24 hours, marine will be disgraced publicly. Marine…I’m not just prophesying on you, I’m prophesying on myself. In 24 hours, the truth will be exposed,” Mr. Suleman told his church members amidst cheers.

“In 24 hours, the marine kingdom will be disappointed. Kingdom of the water and their representatives, that made themselves available tool will be disgraced. And they shall know that it’s the ‘I am that I am’ that sent me.

“We don’t fight with our mouth; we fight with our knees. We can’t do certain things and still carry the anointing that we carry, no we don’t do that nonsense.

“If I’m true or not true, real or not real, 24 hours. I’m tough mehn, I’m tough. You don’t see me preaching? Do I look shaky? Do I look worried? Get a better agent.

“If the devil wants people to start doubting you, he attacks your reputation. We know this. And they won’t stop. It’s the truth. One problem, because I said ‘don’t kill Christians.’ That’s all. There’s nothing else. You come out doing drama, acting movies. You should have at least… get somebody that people will believe, look for a presentable, not this..uhmmm. Come on! Come on! Haba!

“I’ve travelled round the world, I’ve seen all things, is it that thing? Ah! If I were to go to the market there are people that will sell pepper to me I won’t buy,” Mr. Suleman said in apparent response to Ms. Otobo.

In another video, he told his congregation not to expect the enemies to fold their hands during the fight because it’s not a physical battle.

“And the truth is, the people who were busy actually spreading it were Christians, were pastors trying to discredit some of you that believe in this Grace.

“Please, when you get back, ask them ‘how far?’ And please mark those people, they are not your friends. If they are in your Facebook, or your this thing, tell them you are deleting them.

“Because even some unbelievers knew that this is a set up. Before now, nowhere, scan me on the internet you can’t see one stain. Because by then I didn’t say ‘stop killing Christians.’ The only time I said ‘stop’ was why they said ‘Ok, we will come.’ But the church will always win.

“I’m not going to say anything until Sunday. And if I’m saying anything at all it’s not because of the person involved, it’s because of Christians. Because they know that our weakness is because we are not united. And that my stand in January united Christians, that is what they want to scatter.

“All over the world Christians were crying out. So they said ‘these people are these united? Who spearheaded it? Him. Ok, let’s face him.’

“There are things when Christians here, I’m sorry to say that even some members of these our church were having double minds. Please mark those members. If they are in departments, remove them, because those are demons. You see me every day and somebody can tell you certain things?”

Mr. Suleman also thanked his wife, who had risen in his support when reports of the alleged scandal broke last week.

“As I speak to you now, I have not watched her video, where she said what she said, I’ve not read it. Am I correct honey?” He continued, turning to his wife.

“I refused. Everything about this, it’s Mama that’s been telling me, then some things some pastors will say ‘she said this.’ Reverend Fidelis called me one time and said this is on Sahara desert? Is it Sahara desert? I said don’t tell me, there are things I don’t want to get into my mind.

“Somebody tells you he wants a child, the next thing person gives you something to drink, to remove a child. They could have planned it well, the story is not,..they could have looked for a very good script writer.

“But my joy is, I will be alive to see the reward of the wicked. Please, the same way they were spreading it, when it’s uploaded spread it. Tell our media people let it go more than viral.”

Mr. Suleman’s statement asking his church members to “spread” his video appears to have come before the media directorate’s directive that “All Facebook Live Videos on the issue should also stop forthwith.”

The spokesperson’s refusal to make further comments on the matter made it difficult to further clarify the church’s stance.

Although he insisted it was his comments about the killings in Southern Kaduna that triggered the entire incident, Mr. Suleman said he would continue speaking out.

“Let me beg you, if you’re a pastor, understand, you are not fighting a physical fight,” he said.

“The three fights of Joseph, one was from his brothers. Two was for his reputation, his garment was with Potiphar’s wife, how can you deny it? Three was from government, Potiphar put him in prison.

“Every minister must go through these three phases: the brethren will fight you, your reputation will be targeted, then government will come after you. I’ve passed through the three.”