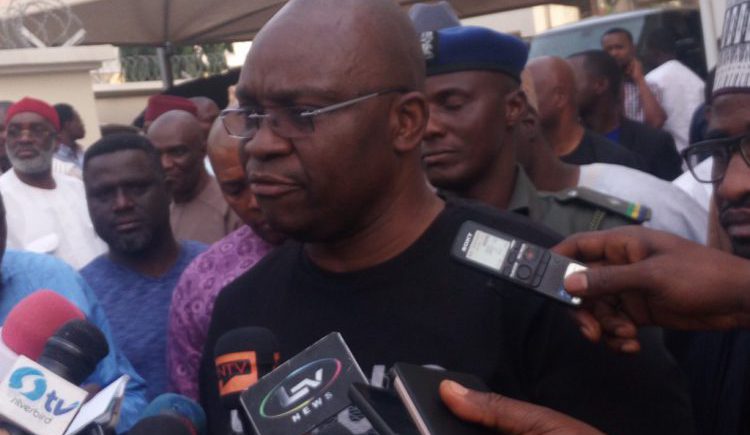 The Ekiti State Governor, Ayo Fayose, has rejected the recommendations of a committee his party set up and vowed not to be part of any convention organised by the Ali Sheriff faction of the Peoples Democratic Party.

A reconciliation committee led by Bayelsa State Governor, Seriake Dickson, in its report presented to Mr. Sheriff asked the PDP national chairman to conduct a convention within 6 months as part of measures to resolve the crisis in the party.

New leaders of the party would be elected at the convention, the committee recommended, while Mr. Sheriff has pledged not to seek the position of party chairman again.

While Mr. Sheriff was declared party chairman by the Court of Appeal, another PDP faction led by Ahmed Makarfi is supported by Mr. Fayose and other governors of the party.

In his statement sent to PREMIUM TIMES by his spokesperson, Mr. Fayose said he is certain Mr. Sheriff is being sponsored by Nigeria’s ruling APC and that he and his supporters would not participate in any convention organised by Mr. Sheriff.

Ekiti State Governor and Chairman of the Peoples Democratic Party, PDP, Governors’ Forum, Ayodele Fayose, has reiterated his support for the decision of the Senator Ahmed Makarfi-led Caretaker Committee to appeal the Court of Appeal, Port-Harcourt, judgement on the leadership of the party, saying; “There cannot be any meaningful reconciliation with an impossible character like Senator Ali Modu Sheriff who is obviously working for political interests different from that of the PDP.”

The governor said he was aware that well over $1 million had been provided by the APC to fund the convention being planned by the Sheriff group while adequate security will also be provided by the security agencies that are now more like part of the APC. This is being done so as to sustain the party’s plot to turn Nigeria to a one party State.

Speaking through his Special Assistant on Public Communications and New Media, Lere Olayinka, the governor, who said he was reacting in his capacity as the governor of Ekiti State to the submission of report of the Governor Seriake Dickson-led reconciliation committee to Senator Ali Modu Sheriff, said; “all constitutionally recognised organs of the party, including staff of the national secretariat are with the Makarfi led Caretaker Committee and since political party is
about membership, Sheriff will continue to carry with himself the burden of lack of legitimacy.”

The governor, who said he had nothing against Governor Dickson, added that; “I respect Governor Dickson, he is my brother and he is entitled to his own personal opinion just as I am entitled to mine. But I must state it categorically that no genuine lover of the PDP will take part in a convention sponsored by the APC.”

Governor Fayose, who said implementation of the Dickson Committee report was beyond Mr. Sheriff, noted that; “assuming but not conceding that the report is acceptable, can Sheriff even implement it? Where will he find seven serving governors, seven former ministers, etc?”

Governor Fayose reiterated that no meaningful reconciliation can be done with Senator Sheriff, adding that; “With APC calling for support for Sheriff, it should be clear to all genuine lovers of the PDP who are behind the crisis in the party.”

He said; “I am speaking for myself and the entire people of Ekiti State that I represent; we won’t be part of any PDP convention sponsored by the APC and I must state categorically that Sheriff is being sponsored 100 percent by the APC.

“We therefore remain undaunted in our support for the Markafi committee and its decision to approach the Supreme Court to challenge the Appeal Court, Port-Harcourt judgement.”