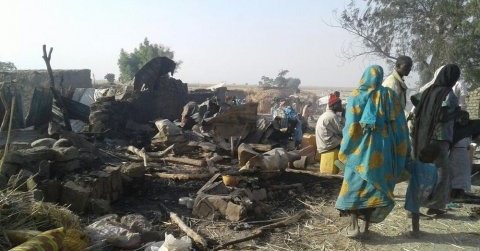 The United Nations has commended President Muhammadu Buhari and the federal government for their handling of the accidental aircraft bombing of an internally displaced persons, IDP, camp in Borno State.

“I think that the Nigerians took leadership of that issue very quickly including at the highest level,” the UN Humanitarian Coordinator for the Sahel, Toby Lanzer, said in an interview with the News Agency of Nigeria.

“President Muhammadu Buhari spoke about it publicly within a matter of hours after the incident when the Nigerian Air Force bombed an IDPs camp obviously by mistake.”

The Nigerian Air Force has since commenced investigations into the attack.

He told the News Agency of Nigeria in New York that the aid workers were fast putting the incident behind them.

“The airstrike ‘galvanised’ us and I know that that sounds a bit of a paradox.

“But you know within a matter of minutes that we realised what had happened, we rolled off the shock and we had people on the ground who were there to help.”

Mr. Lanzer, a UN Assistant Secretary-General, also commended first responders and residents of nearby villages for promptly attending to the victims.

“It’s the brothers and sisters of the IDPs, the villages nearby who went to help.

“And the United Nations Air Service was able to end medical supplies that very as well as the following day as well as medical teams who went to the site.

“Many of the most severely injured were taken to other places in Nigeria such as Maiduguri and taken care of by different aid organisations.

He said dozens of people lost their lives at the scene of the incident while some later died at the hospitals.

He also said persons displaced by the Boko Haram insurgency in the north-eastern part of Nigeria will receive more aid this year.

He said more IDPs would get aid in the next few months.

“What will happen over the next few months is that I expect the aid operations to commence.

“The aid operations will reach out to more people in more places, not only with handouts that is not what the Nigerian people want.

“They also want something that gives them a lift and in that regard, we would do our utmost.

“We will help farmers who are looking forwards to the next planting season and who want to take advantage of areas which have now become secured,” he said.

The UN envoy said the upcoming conference on the Northeast IDPs would be a game changer in emergency response in the year.

“I think there is some good news on the horizon; we will be having this very important conference which is co-organised by Nigeria, Norway and Germany with the support of the United Nations.

“We will be doing that in Oslo on February 24.

“So I’m hopeful that 2017 will be a brighter year for the millions of people across the Northeast of Nigeria who have been affected by this terrible crisis.”

Mr. Lanzer commended the IDPs for their resilience, saying that they had continued to keep the hope alive in spite of all that they had gone and are still going through.

“What I have for the IDPs is ‘admiration’.

“I admire people who have survived such terrible times, such convergence of poverty, of climate change and of violent extremism.

“I admire people who, through thick and thin, have not been ‘victims’ but ‘survivors’; they deserve all of our admiration and all of our support,” the UN official said.