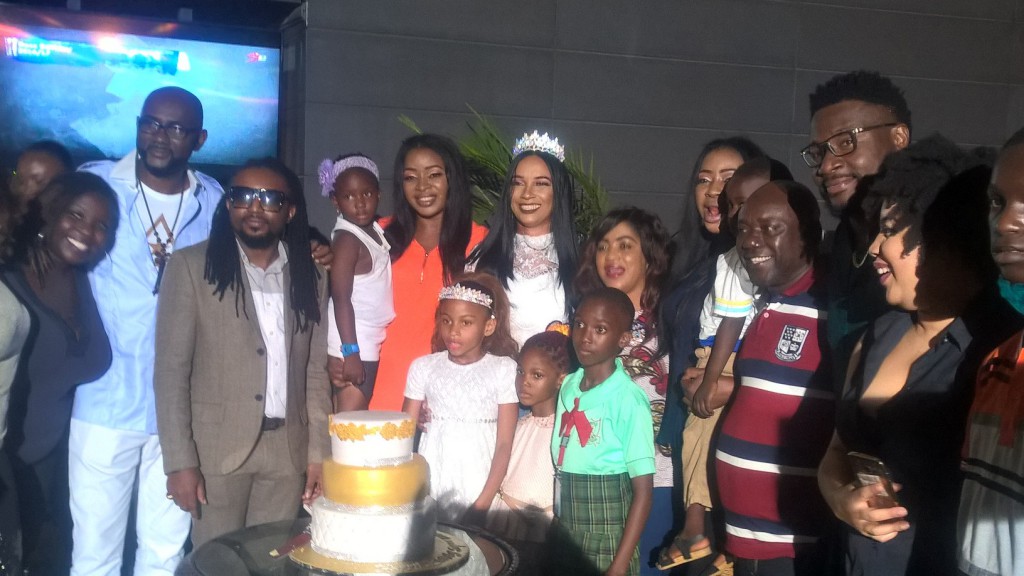 Ibinabo flanked by colleagues and beneficiaries of a scholarship she finances, at her birthday party on Friday night in Lagos.

Top Nollywood actress, Ibinabo Fiberesima, has been in the eye of the storm following her court case over the death of Suraj Giwa, who died in a car accident.

Despite the controversies and outcry that have trailed the sad incident, the actress has managed to remain strong. Fiberesima turned a year older on Friday and to commemorate the occasion, she awarded scholarship to eight indigent students.

In this rare interview with PREMIUM TIMES, the former model and mother-of-three opens up for the first time about her travails, prison experience, marriage and much more.

PT: Congratulations on your birthday. There have been discrepancies in your age on the Internet. What’s your true age?

PT: Why did you decide to award scholarship to eight indigent students?

Ibinabo: To celebrate my birthday this year, I decided to do something different. So my foundation, Ibinabo Care Foundation decided to award scholarships to eight students up to their university level. I will personally follow up and visit the students in school myself. My friend, Monalisa Chinda, was doing the same thing but unknown to her, she was actually paying into a ghost account for four years. I will solely fund this project and I hope to get my colleagues involved in the project as well.

PT: Aside from acting, what else do you do for a living?

Ibinabo: I don’t really act and I just returned to acting. My most recent film is 76 the movie. I also have starred in many yet-to-be released movies. I recently also set up my production outfit, DPT Media, so there is so much to do and I am thankful to God.

PT: As the past Actors Guild of Nigeria president, what are you doing to support ailing veteran actors?

Ibinabo:I am still the AGN President, there has not been an election and we are in court. So, I still remain the president. It’s hard to help the ailing veteran actors because it was easy to reach out to the immediate past president for help but with this government it’s not as easy. It’s not as though they won’t help if we reach out but it’s a longer process.

I always tell our veteran actors to learn to look after themselves. You don’t have to have money to d and that is what I keep telling people. We have so abused ourselves in this industry.

We are workaholics and our lifestyle does not help us. When you are on set, you want to drink all you can, it will mess you up. Actors need to stop for a minute and realize that they have a life like every other human being. Being a celebrity doesn’t t make us supernatural. Once you are over 40, you need to go for medical checkups. In my Facebook post, I spoke about the lumps I found in my breast three times.

PT: Did you accidentally find out?

Ibinabo: Yes I did find out accidentally. They were having a screening at my aunt’s hospital and I walked in and then I just decided to check my breasts casually. I was lucky to have not died that day because of the way the doctor screamed after discovering the lumps and suggested that they took it out immediately. If I weren’t strong I would have collapsed. I couldn’t sleep that night, so I called my dad and went back to Port Harcourt. My dad checked it and they had to get rid of the lumps immediately.

PT:Is your dad a doctor?

Ibinabo: Yes he is a surgeon and the surgery was carried out in his hospital. He was so worried and was looking at the sky while the operation lasted. He didn’t enter the theatre and the result didn’t come out until two weeks and my father couldn’t eat. That’s how afraid everybody was. So, we must look after ourselves, even though sometimes you just wake up and something is upon you.

PT: What major lessons did you learn in your stay in prison?

Ibinabo: I don’t think I learnt a lesson the second time I went to prison. From the first time I went to prison, God told me to slow down, accept life and just know that he is lord and and that’s how it has been. My life has been formed properly. In the past, when people wrote things about me in the papers, I would bother but not any longer. But it rarely happens right now because I am very careful about how I live, I’m very focused and I just give glory to God for who I am today.

PT: You poured out your heart for the first time on Facebook on Friday and you spoke about your marriage. Has your marriage truly packed up?

Ibinabo: People should just let things be and just thank God for me that is all. I am alive today and I think it’s a big deal for me that I have been through everything. Did you see the love on the Internet on my birthday? I was crying half the time. I would be reading some people’s message and I would break down. You wont even believe that the wardresses in prison called me to wish me happy birthday, I just broke down in tears. There is just so much love.

PT: Do you see yourself shooting a biopic or writing a memoir anytime soon?

Ibinabo: My story is ongoing, if I write a book it would be so lengthy so lets just keep glorying God and see where he is taking all of us.

PT: How have you been able to reinvent yourself over the years and remain relevant?

Ibinabo: People just write all sorts of things on the Internet. I love children so when they claim I have 6 children I accept. I have three biological children- two boys and girl and I adopted more children.

PT: we saw a different side of you in 76 the movie, how did you get into character to play the role?

Ibinabo: Working with Rita and Ramsey you must try and be like them or better. Rita just glows; I love Rita, she’s that actress after my heart.

Ibinabo: I don’t know how but they say it is the genes. My paternal grandmother and father’s family, the Majekodunmis are forever young so I think I got their genes.

PT: It’s not difficult to tell that you have succeeded in bringing warring Nollywood actresses together…

Ibinabo: The only reason they don’t talk with each other is because of rivalry and what people say. So I just try to teach them to love themselves and if this other person is doing well give him or her thumbs up because you will do better. There is no need to beef each other, I always implore them to love each other and thank God they listen.

PT: How did you pull through last year after the case was revisited?

Ibinabo: I wont lie I died like a million times, I always say I always try to see the positive in the worst of situations. I just prayed to God, telling him that I was getting back into prison and that he should help get me out.

PT: Were there times you wished death upon yourself?

Ibinabo: The first time I went to prison, I would have committed suicide. But this second time when it was so bad because I had just had the surgery. So nobody knew about it because I try not to put my public life out there and so I was really in a bad state. Some people whom I met the first time in prison were still there. So, I just took it in m stride and I thank God I was brought out. It’s not a nice place.

PT: How about the family of the deceased?

Ibinabo: It’s the grace of God; I’m still begging them for forgiveness. I’m imploring everybody to join me in begging them and to also pray with me. I am not a bad person I’ve done it all. People have said I didn’t beg but I did everything humanly possible being and God bears me witness. I am still begging because someone dear lost his life. I keep saying how sorry I am but it comes across as though I don’t care or I’m arrogant. I would never do that. It breaks my heart when I read some things and people make me look a devil.

PT: If you could change anything what would it be?

Ibinabo: That accident would never happen, that man would be with his family today. Sometimes I break down considering the fact that I was involved in an accident and someone died. So many versions have been told and some say that I rammed into the deceased.

PT: So, what really happened on that day?

Ibinabo: I was blocked by armed robbers so I swerved to avoid running into them and an oncoming vehicle hit my car and that’s its. The two cars collided and that’s the truth of what happened.

PT: What projects do you hope to embark on in the near future?

Ibinabo: I depend on the grace of God and wherever it takes me is where I will.