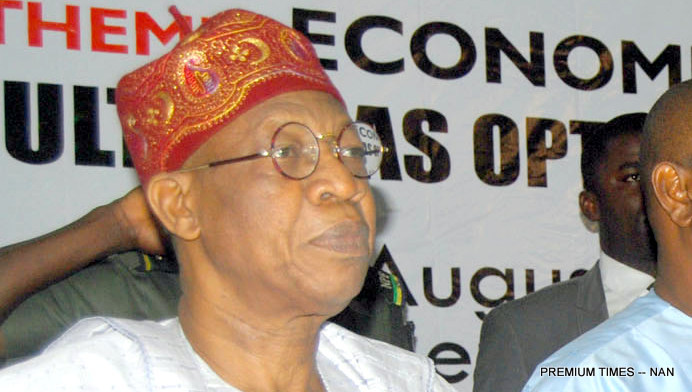 Things will be better for Nigerians in 2017 — Lai Mohammed

The Minister for Information, Arts and Culture, Lai Mohammed, has commended Nigerians for their perseverance and understanding, urging them to look forward to better times in 2017.

Mr. Mohammed spoke to journalists at a programme tagged “A special evening of music and camaraderie to usher in the Yuletide season”, organised by the Lagos State Government at the State House, Alausa.

“We give thanks to God that we are alive; by the grace of God, next year will be much easier.

“2016 has not been a particularly easy year even for governance because the economy has not done much as well as we thought.

“This is not because of incompetence on the part of government but because of the general global slowdown and this affected commodity prices,” Mr. Mohammed said.

According to him, despite all, the government tried its best, especially in the face of challenges with the Niger DeIta, and has more than thrice intervened and bailed out some states.

Mr. Mohammed commended Nigerians for their perseverance and understanding and urged them to continue to support the government.

The National President of the Nigeria Union of Journalists (NUJ), Abdulwaheed Odushile, told journalists that the Federal Government needed to focus more on the economy, particularly in the area of job creation.

“Government needs to improve the economy by creating jobs directly.

“It should create rooms so that people in the non- formal sector can also create jobs, especially in agriculture, tourism and other areas where they can show their skills.

“It has done a good job in terms of security but it can still be improved upon; if the economy is okay, there will be less crime.

“Job creation is very important and I think government should focus more on that,” Mr. Odushile said.

He also enjoined Nigerians to encourage government to do more in the New Year.

Earlier, the Lagos State Commissioner for Information and Strategy, Steve Ayorinde, said that the programme was the governor’s initiative to usher in the Yuletide season.

“This is more than unwinding, it is in sync with the brand of the governor to use arts, culture and tourism and entertainment to promote excellence in the state.

“You can see from the array of evergreen artistes; this is rich, these are artistes who made their mark in Lagos,” Mr. Ayorinde said.

He said the government’s intention was to celebrate them, honour them and to show that they were integral part of the developmental process in the state.