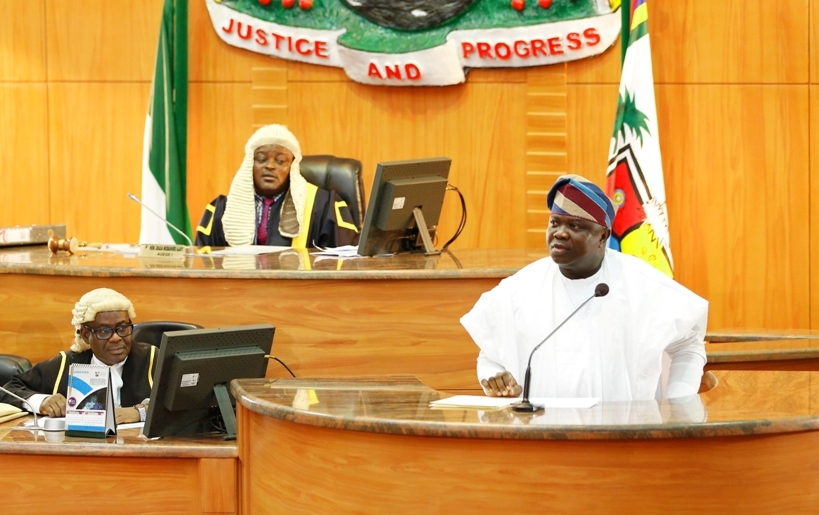 Lagos State Governor, Mr. Akinwunmi Ambode (right), delivering his speech during the presentation of the Y2017 Budget Estimates to the House, at the Assembly Complex, Alausa, Ikeja, on Tuesday, November 29, 2016. With him are Speaker, Lagos House of Assembly, Rt. Hon. Mudashiru Obasa (behind) and the acting Clerk of the House, Mr. Azeez Adebowale Sanni (left).

Lagos presents biggest ever budget proposed by a Nigerian state

The Lagos State governor, Akinwunmi Ambode, on Tuesday presented the 2017 budget proposal of N813 billion to the House of Assembly, assuring that the budget would be judiciously implemented to continue the infrastructural renewal and the enhancement of Lagos as one of the foremost tourism and investment destination in Africa.

Mr. Ambode, who tagged the budget “The Golden Jubilee Budget” as it coincides with the State’s 50th Anniversary, said it would focus on physical infrastructure, while social sectors especially health, education, youth and social development would get adequate attention.

“In the course of the 2017 Financial Year, we shall carry out fundamental reforms on all our modes of transportation – Roads, Water and the Walkways. In this wise, a Public Transport Infrastructure Bond will be issued in the course of the year,” Mr. Ambode said.

“The State Government will embark on the Urbanisation of the Marina axis, Waterways Channelization, establishment of more Parks and Gardens as well as the Community Sports Centres and Stadiums in different locations across the State.”

The budget is also the biggest for any Nigerian state ever.

Giving the key components of the budget, Governor Ambode said recurrent expenditure would gulp N300. 535 billion while N512.464 billion would be dedicated to capital expenditure, representing a Capital/Recurrent ratio of 63 percent to 37 percent.

According to the governor, road construction, rehabilitation and maintenance would be one of the key focuses of the budget, adding that efforts would be geared towards roads that will open up the hinterlands, improve connectivity in the State and reduce travel time.

He listed some of the road projects to include Murtala Mohammed International Airport Road from Oshodi, Agric-Isawo-Owotu-Arepo Road in Ikorodu, Igbe-Igbogbo Phase II- Bola Tinubu Way in Ikorodu, Ijegun Imore Phase II Amuwo in Ojo axis, Oke-Oso-Araga-Poka in Epe, Epe-Poka-Mojoda in the Epe axis and the completion of the Abule-Egba, Ajah and Pen Cinema flyovers.

The governor also said that within the course of the budget implementation, his administration would enter into a Public Private Partnership (PPP) to execute some road projects including Oke Oso-Itoikin dualisation Project in the Epe axis, Okokomaiko-Seme Road Project in Badagry axis and Ikorodu-Agbowa-Itoikin-Ijebu Ode Road Project in Ikorodu axis, just as he disclosed that the Phase II of the 114 Local Government Roads project as well as the construction of the Fourth Mainland Bridge would also kick off in 2017.

“We will fully implement the Medical Health Insurance Scheme and deploy e-Health/ e-insurance Health Service solutions; and complete the on-going upgrading and extension work in the State General Hospitals and Ayinke House in Ikeja. Work will commence on our Medical Park in the 2017 fiscal year,” Mr. Ambode said.

On the revenue expected from federal allocation, the governor said a conservative approach was taken owing to the falling oil prices, which according to him, was about $41.98per barrel at the time of finalising the budget.

He, however, expressed optimism that the state would get an increase in Federal allocation through the 13 percent derivation from Oil and Gas in 2017.

“In view of our financing gap, we shall continue to sustain deficit financing in the short-to-medium term; enhance revenue growth throughout the year on several initiatives including automation and efficient revenue administration,” the governor said.

The Commissioner also said the budget would be funded from a total revenue estimate of N642.849billion while the balance of N170.150billion would be funded through a N100bn Bond Issuance program and a combination of internal and external loans.

Receiving the Budget, Speaker of the House, Mudashiru Obasa, commended Mr. Ambode for keeping faith with the 2016 budget in the area of implementation, adding that Lagos has witnessed a quantum leap in the last one year.

Mr. Obasa, while assuring the governor that members of the House would give the 2017 fiscal document due diligence for the benefit of Lagosians, called on the Ministries Departments and Agencies (MDAs) to furnish the House with all the necessary documents to enable it fast-track the budget approval process.

The Lagos Speaker also seized the occasion to call on the Senate to reconsider the Special Status Bill for Lagos State, saying there was no better time to accord the State such recognition.

Drama in Ekiti as market leader forces prices of foodstuff down