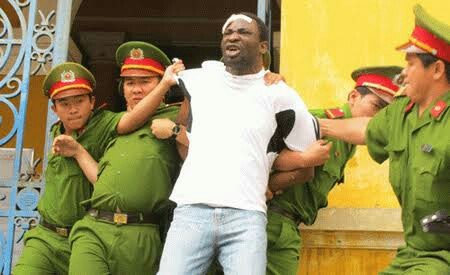 Chijioke Obioha, a 38-year-old Nigerian, has been executed in Singapore after being found guilty of drug trafficking, the local media reported on Friday.

Mr. Obioha was hanged in Changi Prison early Friday morning alongside a Malaysian national who was convicted on separate drugs offenses, the Straits Times reported, quoting a statement from the country’s anti-narcotics bureau.

Mr. Obioha was arrested in April 2007 after being found in possession of more than 2.6 kilograms of cannabis. The quantity surpassed the 500 grams threshold that triggers the automatic presumption of trafficking under Singaporean law.

He was found guilty in December 2008 and was sentenced to death by hanging. An appeal he filed was dismissed in 2010, the Strait Times said.

His execution came two days after he lost an appeal for clemency from the Singaporean government.

Amnesty International, which made serious efforts to overturn his death sentence, condemned the scheduled execution of Mr. Obioha.

“The death penalty is never the solution. It will not rid Singapore of drugs.

“By executing people for drug-related offences, which do not meet the threshold of most serious crimes, Singapore is violating international law,” the rights group said on Wednesday.

Mr. Obioha is the latest Nigerian to be executed for drugs-related crimes in the south-east Asian country.

In 2007, Iwuchukwu Tochi was executed by Singapore in the same Changi Prison despite all appeals from the Nigerian government and threats of diplomatic backlash.