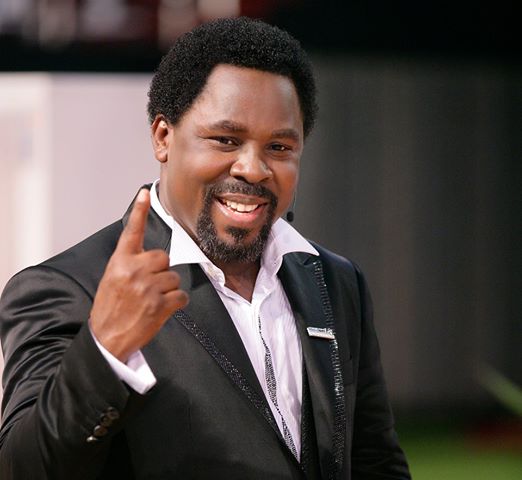 After Temitope Joshua had predicted on Sunday a “narrow” win for Hilary Clinton in the just concluded U.S. presidential election, Mrs. Clinton lost to Donald Trump of the Republican Party on Tuesday. Mr. Trump won over 270 electoral college votes to secure victory.

On Wednesday morning, Nigerians trooped to social media to mock Mr. Joshua (popularly known as TB Joshua), the founder of The Synagogue Church Of All Nations, for the failure of his prophesy to come to pass.

People: TB Joshua u said a woman will win
TB Joshua : u people didn't hear me clearly, I said woolman, the person his head looks like wool

TB Joshua's said "the election will be close and I see a winner, a woman…Maybe Trump was born a woman(transgender), we never can tell

Hillary Clinton actually stopped campaigning when she was told TB Joshua in Nigeria had predicted her victory.
Blame the loss on TB Joshua!

In its place, he posted a seven-line prayer on the church’s official Facebook account urging his members to join him in prayer.

“Ask Jesus to give you the grace to live your life in purity and honour, to listen to the Spirit of God and resist the evil spirits coming to you,” said Mr. Joshua.

“This is the prayer that will strengthen you forever. Ask Jesus to reveal the weakness in your heart and break that spirit. In Jesus’ name we pray. Amen!”

Last Sunday, Mr. Joshua had predicted a “narrow” win for the Democratic Party’s Mrs. Clinton ahead of the November 8 poll.

“Ten days ago, I saw the new President of America with a narrow win,” Mr. Joshua had said in his church sermon which was later posted on the church’s Facebook account.

“By the way, in order not to keep you in suspense, what I frankly saw is a woman.”

Less than two hours after his Wednesday call for prayers on Facebook, the post garnered nearly 4,000 comments.

Charles Ehimen wrote: “Thank you Lord Jesus Christ for all you have done and still doing in my life, Holy Spirit give me the grace to live a life of purity and honour to the glory of your name and assist me to overcome every evil spirit against my life and family. Thank you God for in Jesus mighty name I pray amen.”

Janet Bweendo wrote: “Thank you Lord Jesus for your mercy, help me to stay pure and in honour to listen to the Holy Spirit so that I can resist the evil spirits coming to me, Lord Jesus I pray in the Name of Jesus that reveal my weakness in my heart so that I can break that spirit in Jesus Name.”

Jok Yet John wrote: “Lord Jesus I kneel before and ask for kindness make me strong to resist evil spirits and stand before, purify my heart and make me clean from bad thing in me. Lord bless my thought and accompany me in my pray during morning ours.”

Moments later, Mr. Joshua posted a second message telling his members “Don’t let your dream die within you” and referencing the Biblical Joseph who went from being a prisoner to leading the people of Israel.

It was not the first time Mr. Joshua had come under public scrutiny over his acclaimed prophetic powers. When, in 2014, a refurbished six-storey building inside his church premises collapsed killing 116 people, mostly South Africans, many questioned the preacher’s inability to foresee an incident of such magnitude.

A week after Nigeria’s presidential election in 2015, Mr. Joshua said he told then President, Goodluck Jonathan, that he would lose the election.

Muhammadu Buhari of the then opposition party, All Progressives Congress, defeated Mr. Jonathan in the election.

Mr. Joshua said ‘God’ spoke to him with a message for Mr. Jonathan several weeks before the general elections.

He said God told him -“This message should be delivered to your president, that whatever the outcome of this election, his regime has come to an end. He should accept to save the lives of millions,” he told the congregation.

Mr. Joshua claimed he called Mr. Jonathan by phone, adding that he had previously shared with him many revelations about Nigeria which eventually came to pass.

Insisting the seriousness of the revelation was such that it had to be relayed personally so as not affect votes, Mr. Joshua said Mr. Jonathan promptly sent a close aide to meet the cleric.

After the presidential aide had worshipped at his church during a Sunday service, Mr. Joshua said, he met him and relayed the revelation that Mr. Jonathan’s regime had come to an end.

“Soft landing – that is the language I sent to the president,” he told attendees.