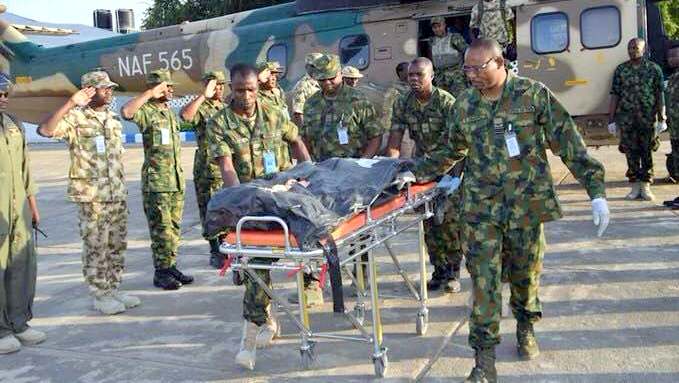 Tributes are pouring in for the Nigerian Army commander who lost his life in a Boko Haram attack on Friday.

Muhammed Abu-Ali, a lieutenant colonel, was killed in a sundown ambush by Boko Haram as he was coordinating a reinforcement to repel an ongoing gunbattle in Mallam Fatori — an insurgent stronghold on the northernmost tip of Borno State.

The Army announced his passing, and that of four other soldiers, in a statement around noon on Saturday.

By Saturday evening, a photo emerged of saluting and pensive-looking soldiers who lined the runway as the body of the fallen officer was unloaded from a Super Puma helicopter onto a stretcher.

The tragedy came barely a year after Mr. Abu-Ali was specially promoted from a major to a lieutenant colonel by the Chief of Army Staff, Tukur Buratai, for the uncommon gallantry he brought to the battlefield.

For several months preceding the recognition, Mr. Abu-Ali had been involved in audacious operations that ended in the liberation of several Northeast settlements previously held by Boko Haram.

The operations that ended in the recapture of Baga and Gamboru-Ngala by the Nigerian soldiers marked a significant watershed in the war against Boko Haram.

The story of his death and valour has gripped the country, with many on social media directing their thoughts and prayers to his family.

Governor Yahaya Bello of Kogi State —where Mr. Abu-Ali is of a royal family— was perhaps the first political figure to express his condolences.

The deceased “was a gallant officer who served the nation with his all and paid the supreme price by laying down his life for the peace of the country,” Mr. Bello said in a statement Sunday. “May Almighty Allah grant late Lt. Col. Muhammed Abu Aljannah Firdaus. Ameen.”

Similar messages dominated Nigerians’ activities on Twitter for the past 24 hours.

“ I just want to commiserate with the family of Lt. Col. Abu-Ali our beloved and gallant soldier that has fallen in the battle against Boko Haram,” said Okoro Chigozie.

Others hailed his heroism.

“Lt. Col. Muhammed Abu-Ali started the race as a hero and ended it as one,” woman who identifies herself simply as Rabiya tweeted. “May Allah have mercy on his soul and expose the ‘bad seeds’. Amin!”

But, in the middle of the eulogies, security analysts expressed concerns about the vacuum Mr. Abu-Ali’s death would create in the war against Boko Haram.

The military maintained that combat operations are gradually coming to an end and troops are only clearing the sect’s remnants across the beleaguered region.

But with high-profile attacks —such as the displacement of 83 combatants a fortnight ago and the latest that just claimed its bravest commander— occurring at frequent intervals in recent weeks, some analysts are sounding a note of skepticism.

Max Gbanite, a security analyst, said the death of Mr. Abu-Ali indicates that more works still need to be done before Nigeria could proclaim a victory over against Boko Haram.

“The recent attacks should convince the military leaders that the Boko Haram still remains a potent force,” Mr. Gbanite told PREMIUM TIMES Sunday afternoon. “The country has lost a fine soldier and the impact of his death will be felt on the battlefield.”

Mr. Gbanite acknowledged the Chief of Army Staff’s efforts in the improved security in the Northeast, but said the military needs more equipment and skills to significantly contain the extremism.

“While I commend the effort of the current Chief of Army Staff, we also must point out the obvious fact.

“The military has succeeded in degrading the capacity of the terrorists to hold major towns and also blocked their supply routes by about 80 per cent, but we still terrorists in the country and their even more desperate and dangerous,” Mr. Gbanite said. “

Mr. Gbanite said President Buhari should tone down his rhetoric and give appropriate supports for the war efforts.

“The president is saying Boko Haram is a thing of the past. Well, we all could see that that is not true,” Mr. Gbanite said. “I implore him to give our troops support to be able to combat the ongoing asymmetrical warfare by Boko Haram.

“After the physical assaults, we’ll get to the psychological stage to hinder Boko Haram’s ability to launch new recruitment exercise.”

“The army has done very well in the last one year,” Mr. Nwanze said. “However, it appears that the military leadership has not taken into account the shifting nature of the terrorists’ tactics, and adjusted accordingly.

“This oversight may have given the terrorists a chance to observe, restrategise and regroup. It is also important to note that our neighbours have not fully played their part in denying the terrorists space to manoeuvre,” Mr. Nwanze said.