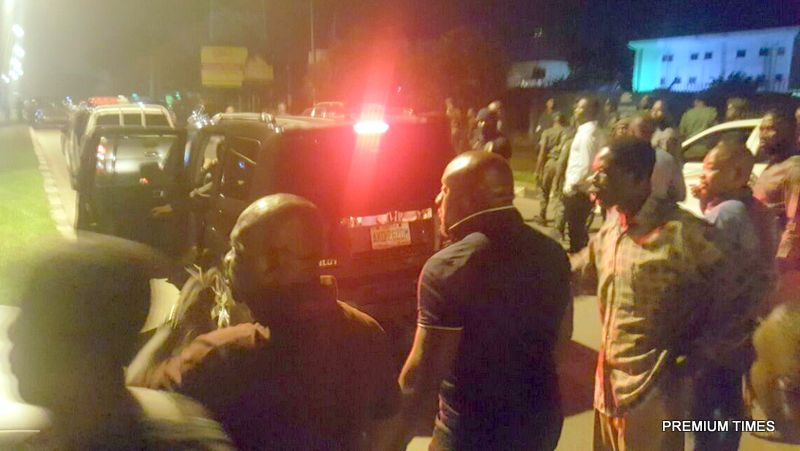 The State Security Service on Friday executed an overnight raid on the residences of senior judges across the country, recovering huge cash and documents linking the judges to exotic properties and suspected corrupt practices.

The reason for the raids are not immediately clear, but sources said the operatives stormed the residences in search of evidences linking the judges to corruption.

The judges were however not arrested.

The operation was carried out simultaneously in the capital Abuja and in Sokoto, Port Harcourt, Kano, Enugu and Gombe.

Multiple sources said the clampdown began in Gombe State where the SSS moved against Justice Muazu Pindiga, who served on the elections tribunal in Rivers State.

In Abuja, official quarters of Justices Sylvester Ngwuta and John Okoro of the Supreme Court were besieged by the SSS for several hours overnight. The operation continued into early Saturday morning.

Also in the capital, the SSS stormed the homes of Nnamdi Dimgba and Adeniyi Ademola, both of the Abuja Division of the Federal High Court, located inside the Apo Legislative Quarters.

Both judges are neighbours on Samuel Ogbemudia street of the Apo quarters.

It is not clear why he was targeted but the judge recently gave a decision against the continued detention of a retired Air Commodore, Mohammed Umar.

Mr. Umar was arrested following allegations of fraud, illegal possession of firearms and abuse of trust. He was granted bail with a bond of N100 million.

Justice Dimgba had in his ruling ordered the SSS to release Mr. Umar or risk being committed by his court, the source, a Senior Advocate of Nigeria, explained. The SSS failed to obey the order and continued to hold Mr. Umar.

In Rivers State, Governor Nyesom Wike and the police prevented the SSS from accessing the home of Justice Mohammed Liman of the Port Harcourt Division of the Federal High Court.

The officers reportedly stormed the home of the judge at 35 Forces Avenue, Port-Harcourt, the state capital.

A statement by Mr. Wike’s spokesman, Oraye Francis, said the operation was led by the Rivers State Director of SSS, Tosin Ajayi.

The operatives, “rough-handled Governor Wike, pushing him around and injuring his hand,” Mr. Francis said. “A few of the operatives cocked their rifles and threatened to shoot the Governor.”

No reason has been officially given by the SSS for Saturday’s raids and the agency currently has no spokesperson.

EDITOR’S NOTE: THIS POST HAS BEEN UPDATED TO REFLECT ADDITIONAL INFORMATION OBTAINED BY THIS NEWSPAPER.