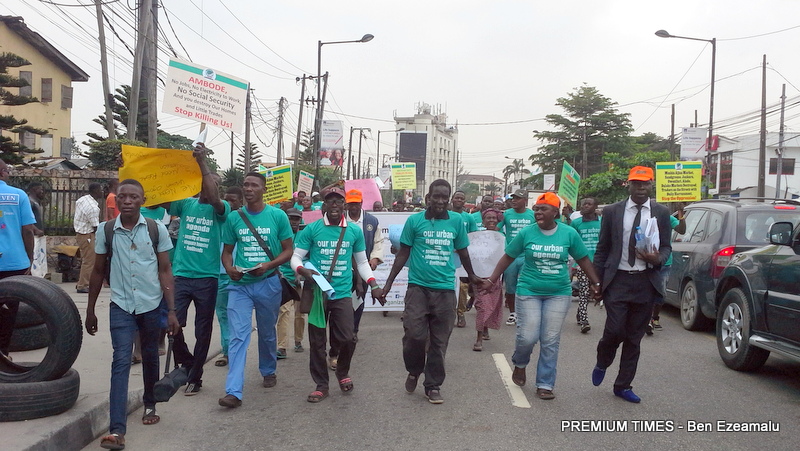 The placard-bearing protesters, who marched down Awolowo Road in Ikoyi, also kicked against the government’s ban on street trading.

“The poor are the ones who voted for government. In the days of the elections we saw the rich people crossing the borders, flying out of airports because they said the nation will be on fire.

“But the poor remained behind, voted massively to see a new change, this is the change we are seeing, contrary to the expectations of our people.”

The Lagos State government had embarked on a massive destruction of properties as well as forced evictions across the state for “causing environmental nuisance, traffic snarls and security threat to the neighbourhood.”

Last July, Governor Akinwunmi Ambode announced his decision to enforce the ban on street trading in the state. The law stipulates a N90,000 fine or six months imprisonment for both buyers and sellers.

On Tuesday, the protesters called on Mr. Ambode to reverse his decision.

The protesters assembled at the Falomo Roundabout in Ikoyi on Tuesday morning, as half a dozen Black Maria vans manned by police officers loomed large behind them.

The Nigerian Slum/Informal Settlement Federation, the organizers of the gathering, called on the government to abandon its “hardline policies that do not solve social problems.”

“We are the urban poor. We are organized. We are together. And we have a right to the city,” the group said in a statement.

“Lagos is part of us and we are part of Lagos. We contribute to the economy and the social life of Lagos; without us the economy will fall and Lagos as we know it will be no more.”

In January, the Lagos State government launched a campaign to declare its zero tolerance for street beggars and destituts in the state, saying it had reached an “alarming dimension.”

Mohammed Zaman, one of the protesters, said the failure of government to plan for the physically challenged people forced them into street begging.

“They have families, they have children, they need to take care of them, they need to send their children to school. Everybody leave them to their disability, how can they do that? They cannot do that without support,” said Mr. Zaman.

“Instead of making a law that criminalizes them, that sends them to prison, let these people be taken care of, let them be empowered, let them be given skills to that they can equally contribute to the development of their society and the country at large. There is ability in disability. Disability must not be a crime. We cannot live in a land like this.”

Gbenga Komolafe, General Secretary, Federation of Informal Workers Organization of Nigeria, said the government had demolished over half a dozen markets this year.

“If you go to all these markets, you’ll notice that all the traders are outside while the land of the market that was destroyed is fenced, they fenced the traders out,” said Mr. Komolafe.