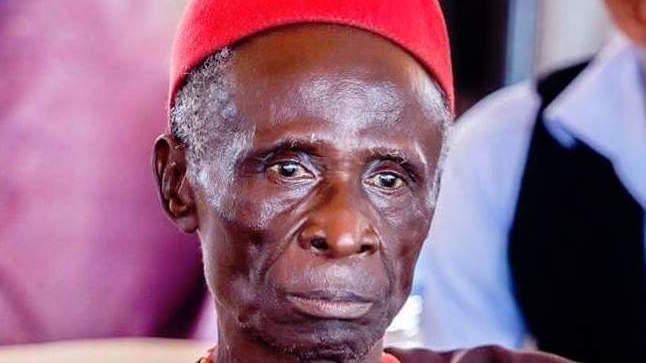 After a prolonged battle with liver disease, veteran Nollywod actor, Maya Ndubuigbo, aka Papa Labista, has passed on.

Although news of his death filtered in on Friday, it was, however, officially announced in the early hours of Saturday by his son on Facebook.

Obi’s appeal partly read, “Today he is not playing a role in any movie to entertain as usual. He is fighting for his life. His liver. He needs you. Needs me. Needs us. Please help save Elder Maya aka Papa Labista.”

Barely a few weeks after the appeal was made, veteran actor, Bruno Iwuoha, announced that The Senior Pastor of Champions Royal Assembly, Kubwa, Abuja, Joshua Iginla, had donated N1 million naira to save Njubuigbo.

It remained unclear whether the money was released to the late actor or not.

A great grandfather, Elder Maya, was known for his village chief priest roles in movies.

An actor, poet and singer, he gave over 20 years of his life to film. He earned the name Papa Labista from the film, Labista.

He is the seventh Nollywood actor to die in 2016

Other deaths recorded in Nollywood this year are:

February: Mike Odachi of ‘Igodo’ fame died at age 51 at the General Hospital, Ikorodu, Lagos State after a brief illness.

May: Nollywood actor, Fred Ebhoria Ekata, reportedly died of kidney disease, which left him bedridden for a year.

July: Veteran actress, Bukky Ajayi, passed on at the age of 82.