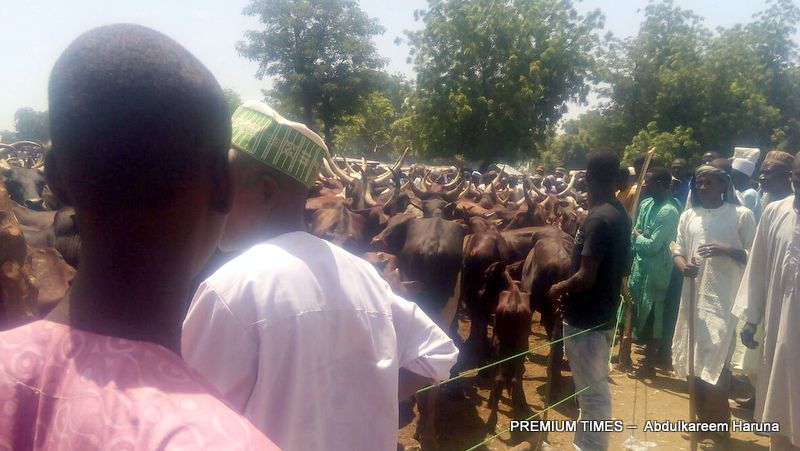 Troops of the Nigerian Army in joint operation with the Civilian-JTF had on Wednesday, at the popular Maiduguri cattle market, arrested three suspected Boko Haram members while trying to sell over 200 stolen cows, officials said.

The ban generated controversy and caused beef scarcity in the town.

The government later reversed its orders following passionate pleas by officials of the cattle sellers union who promised to fish out bad eggs among them.

But sales of rustled cows in the largest cattle market and abattoir in northeast Nigeria have continued unabated.
Luck however ran out on the dangerous group when three of their members arrived the market with a large herd of cows on Tuesday evening.

A team of soldiers and operatives of the Civilian-JTF moved in upon gathering intelligence on the movement of the suspected herders.

Spokesman of the Nigeria army, Sani Usman, said the three men had “during preliminary investigations claimed that they entered into Maiduguri through Mafa with about 200 cows for sale at Maiduguri cattle market”.

Mafa is about 40km away from Maiduguri, which is in the same direction where the cattle market is located.

“The suspects further stated that they are part of logistics elements of the Boko Haram terrorists group that assist in selling cows for the insurgents,” Mr. Usman said.

“They further added that proceeds are remitted to the terrorists to fund their nefarious activities. So far, troops have identified and isolated 23 cows at the cattle market.

“Similarly, one of their agent and spy at the market, Alhaji Ajid Umar, has also been arrested. A total of 170 cows were isolated in connection with him. All the suspects are in undergoing preliminary investigation.”