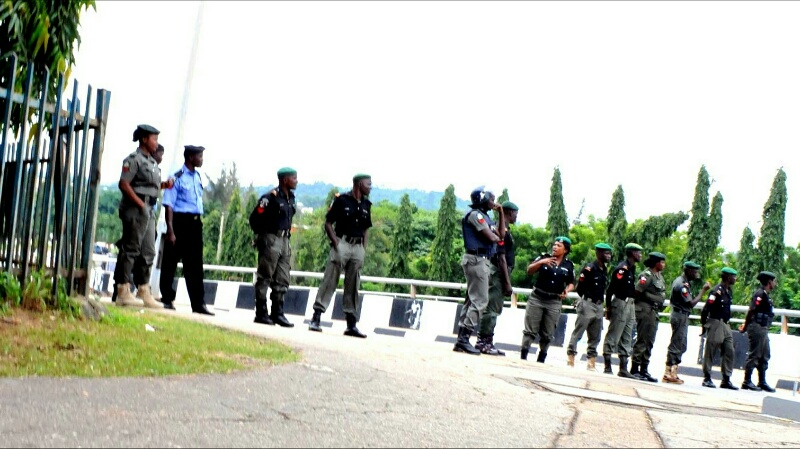 FILE PHOTO: The #BringBackOurGirls group were stopped from entering the Presidential villa on the 25th of August

The continuing spate of arrests and detentions of journalists and bloggers amid the security forces’ violent disruption of peaceful protests underscores how the Nigerian government appears determined to crush dissent and suffocate freedom of expression, said Amnesty International Wednesday.

The organisation is calling for the authorities to ensure the rights of Nigerians to freedom of peaceful assembly and freedom of expression, as guaranteed by international human rights law and the Nigerian Constitution.

“The escalation in the intimidation of journalists and bloggers over recent months seems to be little more than a barefaced attempt by the Nigerian government to muzzle dissenting voices in the country,” said Makmid Kamara, Interim Country Director at Amnesty International Nigeria.

“Alongside the security forces’ violent assault on peaceful protesters, this crackdown constitutes a growing threat to human rights enshrined in international law and the Nigerian constitution.”

On September 22, police blocked a peaceful protest by members of the Islamic Movement in Nigeria (IMN) in the capital Abuja. The demonstration called for the release of their leader, Sheikh Ibrahim Al-Zakzaky, who has been in detention without trial since December 2015. Police fired tear gas canisters to disperse the peaceful protest, resulting in some minor injuries.

About two weeks earlier, on September 6, police stopped members of the Bring Back Our Girls Movement gathering to march to Aso Rock Presidential Villa to demand that the government do more to secure the release of Chibok schoolgirls abducted by Boko Haram over two years ago. The police had been duly notified of the protest march. Since the abduction of the Chibok girls in April 2014, the movement has been gathering peacefully at Unity Fountain, where recently there has been a continuing police presence apparently aimed at preventing any form of civil assembly.

Scores of supporters of Biafran independence are in detention – many of them since late January – for attempting to hold or participating in peaceful assemblies. On several occasions security forces have used excessive force against pro-Biafran activists who have attended protest marches across south-eastern Nigeria, or who have attempted to do so. Amnesty International has documented cases of arrest, enforced disappearance, and often killing of supporters and members of various pro-Biafran groups in the region.

There has also been an increase in recent months in arrests of journalists and their subsequent detention without trial.

In the first week of September the publisher Emenike Iroegbu was arrested in the presence of his family over alleged defamation. In August, Abubakar Usman, a prominent blogger, was dragged from his home by operatives of the Economic and Financial Crimes Commission (EFCC). The anti-graft agency claimed that he was detained for activities that contravened the Cyber Crimes Act even though EFCC could not point out the provisions of the Act the blogger contravened.

Across Nigeria people, especially journalists and bloggers, are being arrested merely for expressing critical opinions on both conventional and social media platforms. One recent example is the detention of Jamil Mabai, accused of posting comments on Facebook and Twitter critical of the Katsina state government.
Also, on 5 September, Ahmed Salkida, a Nigerian journalist based in the United Arab Emirates, was declared wanted by the military and later arrested by the state security services on arrival in Nigeria. He was among three people arrested and briefly detained for alleged links to Boko Haram and for facilitating the release of a Boko Haram video on the abducted Chibok girls.

“Taken together, these are worrying signs of growing violations of the rights of people in Nigeria to peacefully assemble freely and express their views without the fear of being detained or harassed,” said Makmid Kamara.

“Amnesty International Nigeria is therefore calling on the Nigerian government to comply with its obligations under international human rights law and the fundamental rights provisions in the Nigerian Constitution which guarantee freedom of peaceful assembly and expression. Everyone must be able to express his or her opinion, including through peaceful protest.”

Amnesty International Nigeria is also calling on the Nigerian government to take urgent steps to bring an end to detention without trial and intimidation and harassment of journalists and bloggers, and the security forces’ excessive use of force to disperse peaceful protests.