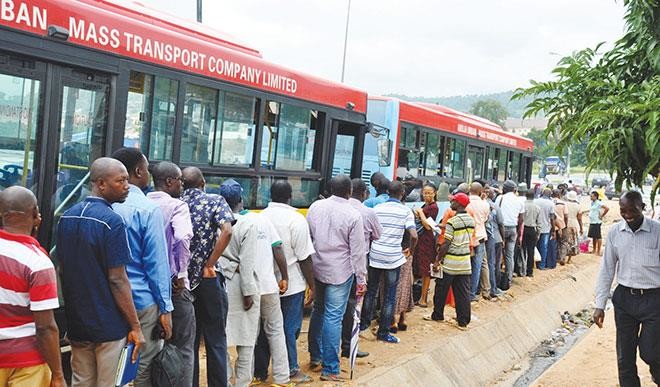 Abuja residents have expressed anger over the one-month long strike by workers of the Abuja Urban Mass Transport Company, which has left thousands struggling daily to get around the capital city.

Workers of the company withdrew their services about a month ago after the government-run firm failed to pay their five-month salaries.

The strike has nearly crippled public transport system in the federal capital.

Bus parks now feature large crowds during rush hours in the mornings and evenings, as commuters depend solely on private service providers who mostly exploit the situation by arbitrarily increasing fares.

Toor James, a civil servant, told PREMIUM TIMES that El-rufai buses mean so much for many workers in Abuja. He said since the strike, other service providers have been exploiting the situation to charge exorbitant fares.

“This is challenging to low income workers,” Mr. James lamented.

Edoka Matthew, a security guard, said since the government established AUMTCO, it ought to make sure the workers were paid so the company can continue to provide service to the masses.

Tarry Ubua, an educationist, told PREMIUM TIMES that many residents of satellite towns like Nyanya, Mararaba, Masaka, One-man village and Ado, who work in Wuse, Central Area and Garki, rely heavily on the so-called El-rufai buses.

According to him, many of these people cannot afford to spend more than a few hundred’s on transportation each day, so they use buses, which usually charge an average of N100 per trip, however long the distance.

“Although I do not use El-rufai buses, I know that passengers pay as little as N70 to N150 from Masaka/Mararaba/Ado/One-man village/Nyanya axis to the centre of town.

“Despite the heavy traffic that plagues that particular express road, the El-rufai buses do not increase their fares, so people like to use them.

“Sometimes, you even see people standing inside the buses all through the ride because they only have N50 as fare from those satellite towns to Wuse.

“This is not an option for coaster buses and small cars, which are now the available means of transportation for these people,” he said.

Since the strike, commuters now pay as much as N200 to N250 from these satellite towns to the city centre.

“The masses are the ones suffering from this strike action. I think the powers that be should just settle these workers so the poor masses can resume paying less for transportation,” Maureen Aba, a resident, told PREMIUM TIMES.

An official who pled anonymity at AUMTCO had earlier told PREMIUM TIMES on September 7 that the Federal Capital Territory Administration (FCTA) planned to shut down the company.

According to him, in-house investigations revealed that FCT minister, Muhammad Bello, had agreed to scrap the transport company on the recommendations of FCTA officials.

Should the minister carry out the plan, about 920 staff of the company will join the labour market, aside throwing the commuter system in the territory into chaos.

However, when PREMIUM TIMES on Friday sought clarification from Stella Ojeme, the Director of Information at FCTA, she denied the claim of plans to shut AUMTCO down.

“FCTA is not planning to shut AUMTCO down. The company will be restructured to put it back to profitability, since it is a limited liability company.

“As for the salary arrears, FCTA may consider a bail-out after the restructuring. The restructuring will occur after the Administration has completed a forensic study of all the company books which has already started,” she said.

Hassan Abdulhameed, a driver with the company, Thursday informed PREMIUM TIMES that AUMTCO management had told workers over six months ago that there was no money to pay them.

“They told us the FCTA had not made the money available. Since we embarked on the strike action, many of us have been looking up to God for survival,” he said.

Mr. Abdulhameed, who claimed he usually made over N80, 000 for AUMTCO in a day, is now forced to engage himself as a freelance driver.

“We get lucky sometimes to get outside jobs, where a person may need the services of a driver and call us to work for a small sum. If not for small opportunities like these, survival would have been very difficult,” he said.

Nigeria to protest seizure of pilgrims’ e-wristband by Saudi Authority