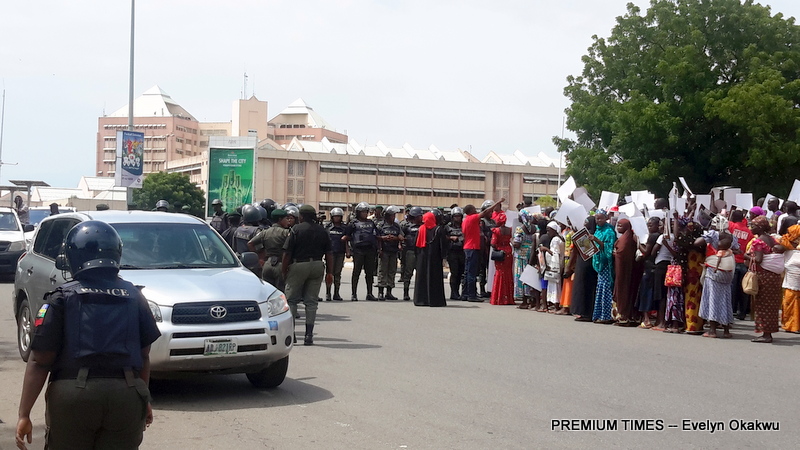 Bring Back Our Girls protesters being stopped by the Nigeria Police

More Nigerians have risen in condemnation of the Nigeria Police Force over its disruption of last week’s rally by the #BringBackOurGirlsGroup.

The group, which over the last two years has asked government to do more to ensure the return of over 200 girls abducted in a secondary school in Chibok, Borno State, came under attack by security operatives on Tuesday. The operatives tried to prevent the protesters from proceeding to the Three Arms Zone of Abuja to continue the protest.

The Police had in a statement on Friday clarified that it was not against peaceful protests in Abuja.

The statement, signed by the Force Public Relations Officer, Don Awunah, said the police recognized the impact of peaceful protests in a democracy and would not jeopardise the rights of Nigerians.

After it attempted to prevent the Bring Back Our Girls, #BBOG, group from embarking on its protest to the Presidential Villa in Abuja on Tuesday, the Force came under heavy criticism by Nigerians. Apart from the protesters, others like Nobel Laureate Wole Soyinka and human rights lawyer Femi Falana also condemned the police ban.

Mr. Falana described the police action as exposing the Nigerian government to “avoidable embarrassment” and called on Mr. Buhari to adopt any means possible towards preventing undue harassment of the #BBOG group.

“Since the fundamental rights of the Nigerian people … have been upheld by Nigerian courts, the illegal ban on public protests in the Federal Capital Territory by the Inspector-General of Police will not be allowed to stand”, Mr. Falana said.

Mr. Soyinka had also described the ban as undemocratic, adding that the group was only exercising its fundamental rights.

SERAP, in its statement by Timothy Adewale, appealed to the United Nations Special Rapporteur on the rights to freedom of peaceful assembly, Maina Kiai, to “remind the Police Force in Nigeria that peaceful protest is lawful, as prescribed by the Nigerian constitution and no restriction on such, should be tolerated.”

“No Nigerian law makes it a crime to demonstrate in any part of the country. Harassing the BBOG group and stopping its members from proceeding peacefully to the seat of government is overkill.

“SERAP is seriously concerned about the continuing indiscriminate and disproportionate restriction on the right of members of the BBOG group to protest. All Nigerians including members of the BBOG group have the rights to freedom of expression and to protest. There is absolutely no reason to view these members as anything other than committed peaceful demonstrators,” SERAP said in its statement.

While declaring that the #BBOG protesters were allowed to proceed with their protest, the police said such rallies would not be permitted on highways. The road leading from the Unity fountain, where the BBOG commence their protest, to the Three Arms Zone, where it intends marching to, is a mini-highway, an indication the police may still try to stop such march without stopping the gatherings.

“It’s the primary duty of the President Muhammadu Buhari’s government to protect all demonstrators, including the BBOG group and enable lawful demonstrations to proceed peacefully. Carrying out this obligation is about deeds, not words.

“SERAP considers restrictions placed on the right of the BBOG group to peaceful assembly by law enforcement agencies as unnecessary, disproportionate, unjustified in law, and in bad faith,” it said.

The #BBOG agitation increased in August following the release of a video by the Boko Haram showing some of the kidnapped girls.

The terror group said it would only exchange the girls for its detained members.

Although the president has agreed to exchange the girls, the #BBOG group said the government’s commitment towards the release of the girls is insufficient.

They vowed to march every 72 hours to the Villa until an obvious commitment is ensured and the girls are released.