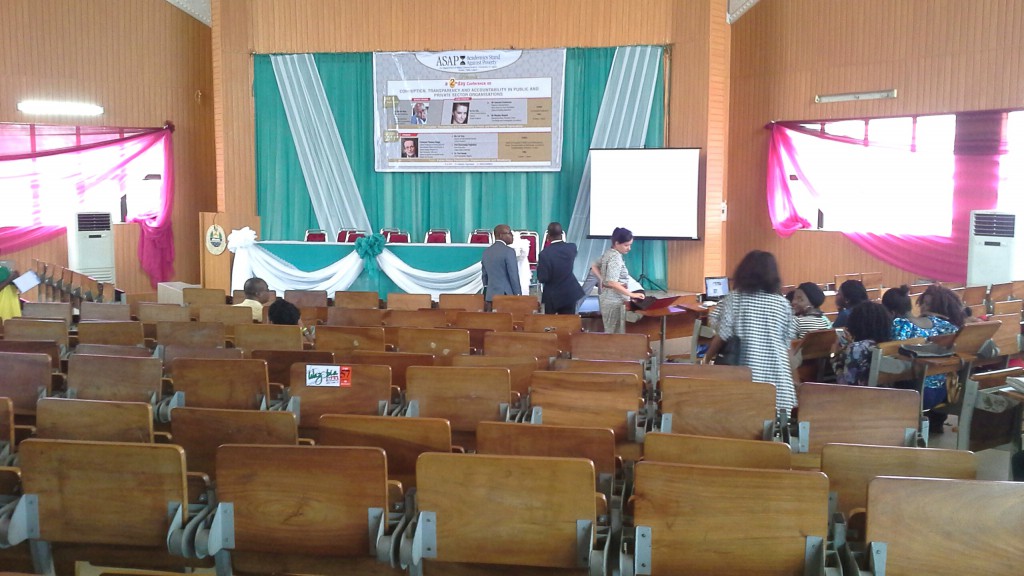 This year’s conference of Academics Stand Against Poverty, an association of academics across the globe, tagged ‘Corruption, Transparency and Accountability in Public and Private Sector Organizations’ is holding today, September 6, at the University of Lagos.

He is joined by other speakers including Innocent Chukwuma, West African Representative of Ford Foundation; Cat Tully, former Adviser to former British Prime Minister, Tony Blair; and Musikilu Mojeed, Editor-in-Chief at PREMIUM TIMES to discuss the rampaging corruption in Africa and how to curb it.

A PREMIUM TIMES reporter is at the Afe Babalola Hall venue of the conference to bring you live updates of the event. 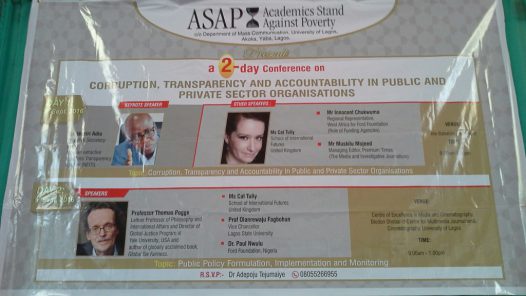 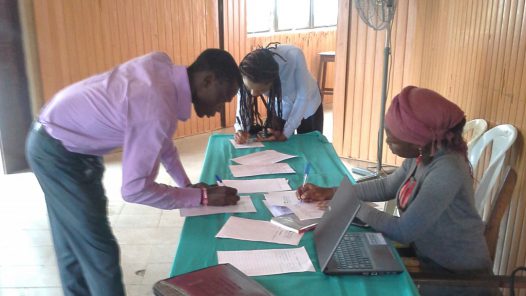 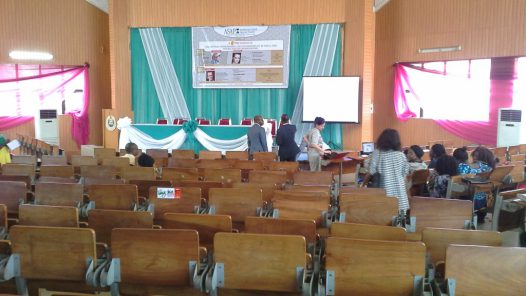 He says corruption is a concern to all Nigerians.

“This year, revelations of corruption within the public and private sectors in Nigeria assumed a frightening dimension, and we witnessed individuals of refined education, exposure and social taste dip their hands into the public till and steal in manners that reek of poor finesse and abject greed.”

He says courts and jail may not be able to deter corrupt Nigerians from stealing public funds.

Rahman Bello, the Vice Chancellor, says the theme of this year’s conference is apt, particularly in the light of global and local revelations.

“The memory of the Panama Papers scandal is still fresh, where we read and heard impossible accounts of leaders the world over, who had spent decades making their citizens poor,” said Mr. Bello, represented by Duro Oni, Deputy Vice Chancellor, Management Services.

It’s time for the first lecture. 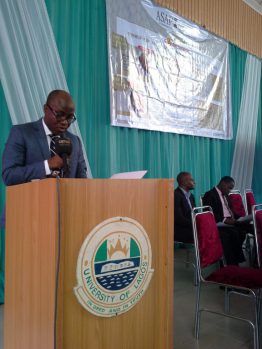 He says he would speak on the oil industry in Nigeria.

He says the oil sector is important in the lives of Nigerians.

He describes the Panama Papers’ revelations as shocking.

“If anything, the revelations have further put a line to Jeffrey Archer’s famous line: indeed, there is no honour among thieves.”

He says the fall in oil prices is not the sole culprit for our current economic troubles.

“Believing that it is deludes the managers of the economy, and diminishes the country’s capacity to administer the right therapy.

“Here is where the political element becomes useful as an explanatory variable for this ailment, and also exposes the fall in prices as only an inevitable trigger.”

Mr. Adio says Nigeria has continued to push the boundaries as one of the leaders of the 51 countries implementing EITI.

“Instead of limiting itself to just financial audits, Nigeria conducts three-part audits that include financial, physical and process data.”

He says the extractive sector is the epicentre of corruption in Nigeria.

“If you want to solve the problem of corruption today, please focus on the extractive sector. All the major issues of corruption, where does the money come from? It’s from this sector.

“Oil and gas sector account for just 8-9 percent of our exports.”

He says since inception, Nigeria had conducted six oil and gas audits, four solid minerals audits, and one cycle of Fiscal Allocation and Statutory Disbursement audit.

He says NEITI’s audit report of the oil and gas sector released a few months ago showed the following:

1. An outstanding of $3.8 billion and N358.3 billion yet to be remitted to the Federation by NNPC and its subsidiaries.

3. Non-remittance of NLNG dividends to the government by NNPC for eight years amounting to $12.9 billion.

5. Lack of metering infrastructure more than ten years after this was flagged in the first NEITI audit report.

Musikilu Mojeed, Editor-in-Chief at PREMIUM TIMES, begins by saying the University of Lagos made it impossible for him to study at the institution.

Mr. Mojeed is speaking on ‘The Media and Investigative Journalism.’

He says investigative journalism in Nigeria has given voice to the voiceless and had made officials to likely be less corrupt.

He says the media must commit more resources to training of reporters on investigative and data journalism.

“The media must also push for action, impact and forge alliances.”

He says PREMIUM TIMES had forged an alliance with NEITI recently and it had been fruitful.

“Citizens must be helped to understand what deprives them of good hospitals, good schools and so on.”

He says the media must pay special attention to anti corruption agencies, government at both state and local levels, and also within its own ranks.

“For as long as the brown envelope continues to rock our newsroom, investigative journalism would continue to be weak in Nigeria.”

He says one of the best newspapers in Nigeria, NEXT, closed down because it was very critical of government.

“When you report on corruption you will not get immediate result or impact.”

He says when the newspaper began reporting the Panama Papers, the government pretended not to notice, but it kept on and on.

“Investigative journalism is not a 100 metres dash, it’s a long distance marathon.”

Mr. Mojeed says the media must know that corruption reporting cannot be a one-off affair.

“It has to be a consciously planned, and sustained project. It means there has to be consistent follow-ups. You just have to keep reporting on the matter until authorities act.

“For instance, the reporting on what is now known as the Diezani scandal started way back in 2011 when I was the editor in charge of investigations at NEXT newspapers. At that time, in a series of articles, we reported on the high-level corruption involving officials of our oil and gas industry.

“We exposed bribery and the allocation of Nigeria’s oil assets to cronies who only paid pittance to the national coffers.

“The regime in power at the time took no action. Diezani was very powerful in the administration and she was an untouchable. Rather than investigate her, the Jonathan government reappointed her to office. In fact there are those who believe that those series of reports led to the demise of NEXT.

“The administration succeeded in scaring advertisers and investors away. The paper soon ran out of cash and it closed shop. We all lost our jobs.

“We moved on to start PREMIUM TIMES and we continued our reporting on the matter. Four years later, another government came to power and Diezani and her allies are now being investigated in Nigeria and elsewhere.”

Cat Tully, former Adviser to Tony Blair, is next.

Ms. Tully says SDG is a global movement to get poverty significantly eradicated by 2030.

She says accountability and transparency are critical to the future.

To address high mortality rates, we need resources, resources that are being diverted by corrupt people.

She says the point of the SDG goals is to generate actions.

“One way is to use events like this to create partnerships and alliances.”

Professor Browne Onuoha of Department of Political Science says there is no willing leadership to fight corruption.

“All that we are doing here is living in denial. A governorship candidate will use N50 million to pick up a governorship form. There is a lot to be done.”

He says it had cost the nation a huge amount to maintain “a very large “amorphous federation.”

Professor Omololu Soyombo of Department of Sociology says ASAP had done well since its establishment.

“We need to strengthen our institutions for more effective performance if we are serious about fighting corruption.”

Professor Ralph Akinfeleye of the Department of Mass Communication says there’s a poverty of ideas in the country.

Time for the question and answer session.

He says Nigerians have a problematic relationship with the government.

“We have two sets of values, one for ourselves and one for the public domain.”

Mr. Mojeed says the issue of media ownership is as old as journalism.

“It’s not just Nigeria. It’s all over the world.”

He says the advent of new media had made it possible for diversity.

He says the PREMIUM TIMES Centre for Investigative Journalism is attempting to get the youth to, not just embrace journalism, but indepth journalism.

Ms. Tully says youth should not ask to be invited into conversations.

If you can, force yourself into the conversation, don’t wait to be asked, it’s your future.

Ismail Ibraheem, Co-Chair of the West Africa arm of ASAP, wraps up the programme with a vote of thanks.

2016 U.S. Open | Serena advances but Murray is knocked out