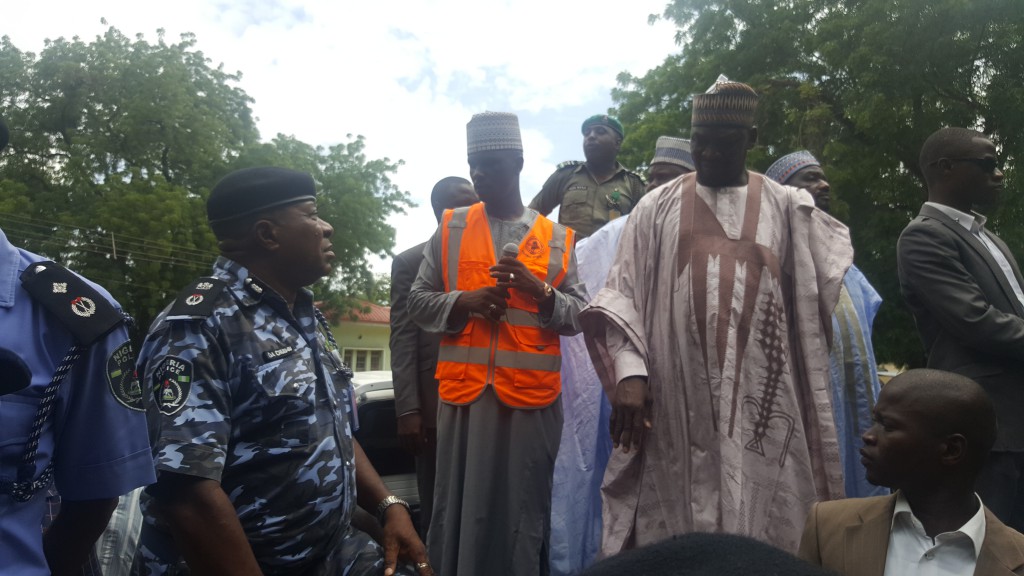 Hundreds of Internally Displaced Persons (IDPs) in Maiduguri, the Borno state capital, who blocked highways early Thursday to protest against poor feeding in their camps, have ended their demonstration.

They IDPs suspended their protest after the government disbanded its committee responsible for feeding the protesters.

The angry IDPs, mostly women and children had earlier mounted barricades of stones, sticks and tires which caused massive traffic jam along the Kano-Maiduguri highway which is the main entry point into the city.

The IDPs, who defied all pleas and entreaties from soldiers and police officials, insisted they would only remove the barricades and vacate the highway if the government supplied their food and attended to their other demands.

“We are being treated like slaves here in the camp,” said Zakari Modu, a 32-year-old man from Marte. “We are only given a bag of rice to be shared among 15 people and that is to last for a month. Every three days the feeding committee will come and make tea and give each household just a cup to share. This is inhuman and we felt we deserve better treatment.”

The IDPs said they were now better informed on the happenings of government.

They said they had been monitoring the news via radio receivers recently distributed to them by a new radio house that opened office in Maiduguri and they have details of all food allocation to Borno State.

“So how could they tell us there is no food,” asked Maimuna Bukar, a mother of four. Each time the governor is to visit the camp they would rush down here to make things appear normal and no problems; but if the governor leaves we are left on our own. So we are tired of these cheating and wickedness”.

“We are not fighting with government; all we want is food to feed our family. If they cant give us food, let them let us go back to our villages instead of being left to be killed by hunger here,” she said.

The women, who had demonstrated their will to fight for their rights, sat on the floor daring anyone not pleased with their stance to force them to leave.

After about three hours, the state deputy governor, Usman Durkwa, accompanied by the state police commissioner, Demian Chukwu, arrived the scene to plead with the angry IDPs.

Having consulted with some leaders of the IDPs, the deputy governor announced that the camp feeding committee whom they had severally accused of mismanaging the feeding system, had been disbanded.

“We want to assure you that government’s foremost interest is to see that all of you are well taken care of; but since you are not happy with the conduct of the committee, we have hereby disbanded the committee and henceforth we shall supply you with food items directly to cook for your selves. There is no more kitchen feeding in the committee; we are now going to allow household feeding for you,” said the deputy governor.

The deputy governor also announced to the cheer of the IDPs that a truck of grains and other food items would be deployed to the camp before he left the premises.

With that announcement and assurances, the IDPs immediately vacated the highways.

Speaking to journalists, the deputy governor said “their grievance is that they are not satisfied with the central feeding system, and they have mentioned their problems to us which we felt they have a point, and we have decided to disband the central feeding system to allow them now cook their own food. We have ordered that a truck of grains should be supplied to the camp and we are happy that they have lawfully returned to the camp.

The IDPs have warned that henceforth they would not sit idle and lament in their camp again.

“This is just the beginning, anytime we noticed someone somewhere is shortchanging us or we are being made to suffer, we will come to the streets and show them our strength via peaceful protest,” said Adam Mallum.