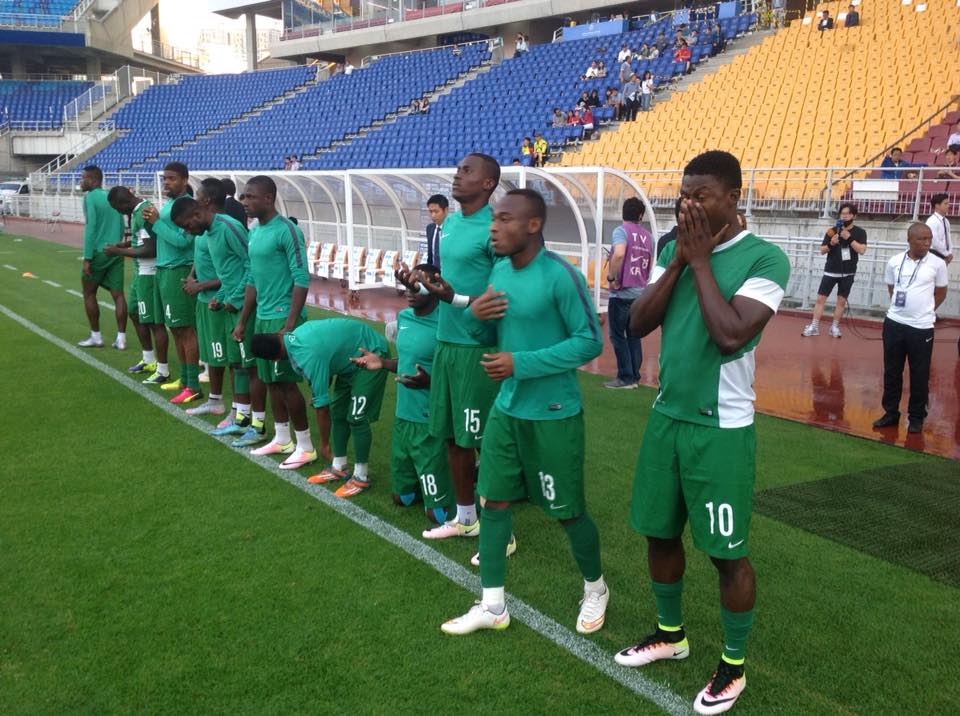 The Nigeria U-23 team are sure living the dream in Rio.

Tonight, they will go a step closer to their gold medal target by taking on their German counterparts in the second semifinal of the men’s football event.

The Dream Team VI will miss two key players. Azubuike Okechukwu was suspended and Oghenekaro Etebo is out with injury.

But Coach Samson Siasia is expected to nonetheless fashion out a winning strategy against the Germans.

The Nigeria U23 got to this stage by winning their group convincingly before beating Denmark in the quarterfinals.

Germany, on their part, hammered Portugal 4-0 in the quarterfinals, just after cruising past Fiji 10-0 in their last group match.

Many fans expect an entertaining clash, and the winner will join hosts Brazil in the finals of the men’s football event.

Stay here for the live updates from the Corinthians Arena in São Paulo.

– Final Whistle. Germany proceeds to the final. Nigeria will now have to play for Bronze. It was an amazing game. But they were outplayed by a better German side.

– Goal! Germany scores again. Nice strike. A cross from the right side, beats the keeper and a sloppy defense lets the ball pass onto the waiting feet of a German player. Nigeria 0-2 Germany.

– A corner kick for Germany. Shot into the arms of Nigerian goalkeeper, Daniel.

– A German change. Mayer is out for Petersen.

– Nigeria with it’s best chance at a goal. A freekick just outside the German 18 yard box after a foul on Ajayi. Amuzei shoots wide! Huge miss.

– The German defense is so tight and would not permit that one chance Nigeria needs to level up.
German substitution: Bender is off for Promel. Gnarby is also out for Max. L. Bender is yellow carded for a rough tackle on Mikel.

– Nigeria losing too many passes and ball possessions. 20 minutes to the end of the match, Nigeria not creating fantastic chances.

– Nigeria makes first change. Sadiq Umar is off for Ajayi.

– Great opportunity for Nigeria! A free kick at the edge of the 18 yard box. Mikel would take it …A strike!!! off the side of the net!

– Match has been stable so far. Both Germans and Nigerians are making repeated efforts to score each other. Few times the Nigerian defense has been leaky, but the goalkeeper, Daniel, has been awesome.

– “All we are saying, give us one goal” Nigerian supporter’s sing as the Germans make a fast one to narrow miss off a left side cross that went across Nigeria’s empty post.

– Third corner of the game for Germany, off a great save by Daniel, Nigeria’s goalkeeper. Arsenal man Gnabry fired a shot from outside the box but a fingertip save from Daniel denied the German star a goal.

– Second Half begins. No changes by either side.

– As it stands Germany have scored 20 goals in Rio. Can leaky Nigeria defense stop the rampaging Germans? The second half will tell!

– Germany led possession in the first Half 51%-49%. The Germans had three shots on target. Nigeria two.

– Nigeria putting up a good play so far. Coordination is on point … a strike by Sadiq Umar is locked by the Germans. Corner it is. Corner is taken and Sadiq Umar nods wide. First Half ends.

– Germany with a corner. But it is headed away by Nigeria’s Sadiq Umar. But the Germans recovered the ball and with a sleek pass from the right, the Germans were inches away from scoring a goal similar to the earlier.

– Nigeria is rising back into the game. But the Germans are very disciplined and … a save from the Nigerian goalkeeper off a long but hit shot from the Germans outside the 18 yard box. It is still Nigeria 0-1 Germany.

– Nigeria lands its first corner kick after a great save by the German defense. I beautiful dribble by Mikel Obi saw him beat two german defender but a deflection spoilt his aim for the goal.

– Point blank save by Emmanuel Daniel denies Germany second goal. Germany might as well be Nigeria’s greatest challenge in this Olympics.

– Germany have never played in an Olympic football event final and have just a bronze to show for all their participation. The male team will seek to mirror their ladies, who will play Sweden in the women’s final.

– Nigeria has not come from a deficit in this tournament. Colombia beat them in the group stages after falling behind to a fourth-minute goal.

– The Germans with the lead after a goal at the 8th minute. Will Nigeria repeat it’s Atlanta ’96 feet against Brazil?

– Yellow card to Germany’s Serge Gnabry after a rough tackle on Imoh Ezekiel.

– Ndifreke Udo, who replaces Azubuike Okechukwu, is the youngest member of Nigeria’s Olympic contingent – at 18. His birthday was last Monday.

– The Nigeria team are wearing white jerseys tonight.. This is the first time they are doing so at the Rio Olympics