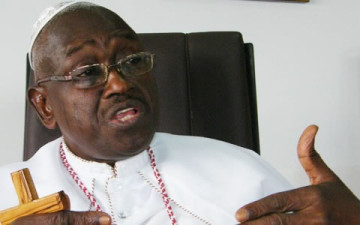 A former Prelate of Methodist Church Nigeria, Sunday Makinde, has warned of “dire consequences” in Nigeria unless urgent measures are put in place to correct the deteriorating situation.

Mr. Makinde said hunger and widespread deprivation had reached unbearable levels in the country and are capable of causing civil disobedience.

“We are sitting on a keg of gun powder. The day it will explode, it will consume us. So many graduates are not employed. Unemployed people are the people behind the militancy in the Niger Delta region,” the paper quoted Mr. Makinde as saying.

Mr. Makinde reportedly spoke at the inaugural forum of retired clergymen which was organised by El-Rehoboth Global Leadership Foundation in Abuja.

The clergyman said the ruling All Progressives Congress lacked the capacity to successfully pilot the affairs of the nation, saying the party is itself riddled with corruption.

“The APC is part of the corruption in the country. They are not fit to be there, they must handle the issue of padding very carefully,” he said.

Mr. Makinde also reportedly spoke about the controversial grazing reserve and pro-Sharia bills in the National Assembly, saying people of southern Nigeria and as well as Christians across the country must reject the bills in their entirety.

The APC-led administration at the center has come under intense public criticism for its alleged indifference to the ongoing suffering amongst Nigerians, which many believe has continued to take a terrible toll on the already over-beaten masses.