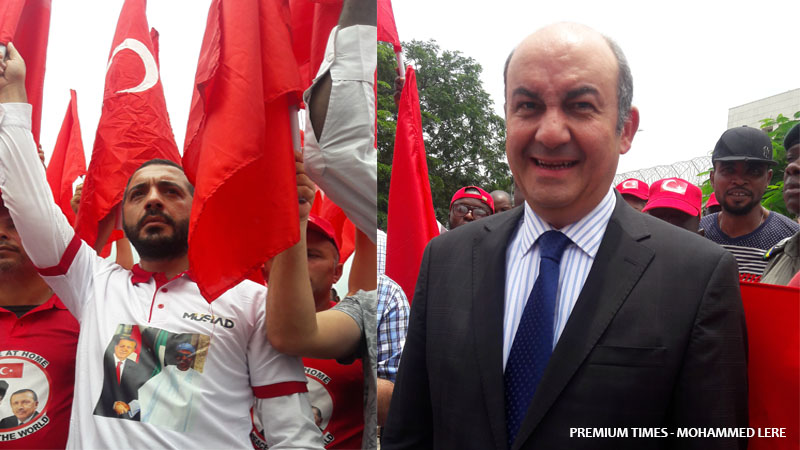 The Turkish ambassador to Nigeria, Hakan Cakil, has spoken of his country’s gratitude to Nigeria for its support during the July 15 failed coup.

Mr. Cakil said his country will never forget the support.

He was addressing Turkish nationals in Nigeria on Thursday, who protested in the Nigerian capital, Abuja, calling for support for President Tayyip Erdogan who survived a coup attempt.

The protest was organised by two groups – Musiyad and Little Turkey Nigeria.

The protesters, about a hundred, embarked on a peaceful procession from the popular Abuja parade ground, near the magnificent International Conference Centre, to the Turkish embassy located on Diplomatic Drive, near Nigeria’s Ministry of Defence.

As they marched, the protesters waved Turkish flags and sang songs of solidarity in praise of President Erdogan.

As they arrived the embassy building, the Turkish Ambassador to Nigeria, Cakil, was already waiting outside to receive them.

Speaking to the protesters, Mr. Cakil commended the enormous support they received from the Nigerian government and people during the failed coup.

“From the beginning, all Nigerian officials starting from his Excellency, President Muhammadu Buhari, expressed their solidarity with the government and the Turkish people.

“The Republic of Turkey will not forget the solidarity of the Nigerian people during the failed coup attempt. We will always remember this support.”

“I will like to express our heartfelt gratitude and appreciation first of all to Muhammadu Buhari, president of Nigeria and commander-in-chief of the Armed forces Federal republic of Nigeria and all government officials, all the Ministers and the people of Nigeria for their solidarity and support to Turkish people,” Mr. Cakil said.

On the issue of Turkish schools and institutions in Nigeria, the ambassador said his government and the Nigerian government were already talking to find a solution to the issue saying, “The government of Turkey will never do anything against the Nigerian people”.

Co-organisers of the protest and chairman of the Little Turkey Nigeria group, Hussaini Kumasi, told reporters that his group jointly organised the peaceful protest to tell the world that Nigeria was in support of democracy anywhere.

“We are solidly behind Turkey on this issue and we support democracy anywhere it is,” he said.

He also called on the government and the Turkish authority to find a quick solution to the issue of the closed institutions in Nigeria. 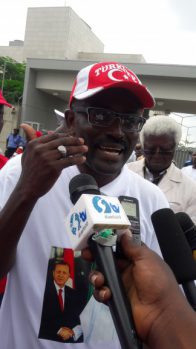 Mr. Cakil had on July 28 called on the Nigerian Government to close 17 Turkish schools in Nigeria for their alleged links with a movement his government says was involved in the July 15 failed coup attempt in Turkey.

According to the ambassador, investigations by the Turkish government showed that a movement led by US-based Fethullah Gulen was responsible for the failed coup attempt, which claimed over 200 lives. was in support of the Turkish president.

President Erdogan tightened his grip on Turkey, ordering the closure of thousands of private schools, charities and other institutions after the failed military coup.