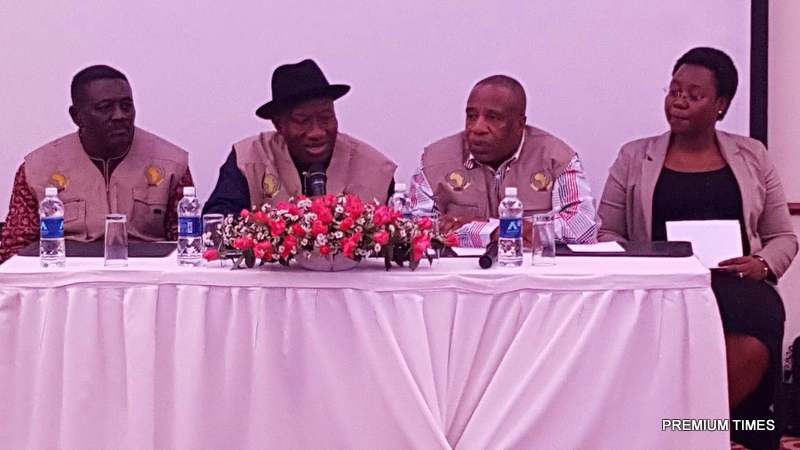 Former President Goodluck Jonathan on Saturday touched down in Lusaka, the capital of Zambia, where he will lead a team of observers from the African Union.

Mr. Jonathan immediately convened a press conference to introduce his team to local authorities, as well as other international agencies on ground for the poll which is slated for August 11.

The AU had appointed Mr. Jonathan as the head of its Election Observer Mission last week, a team that included high profile personalities, diplomats, civic groups and experts.

The AU said Mr. Jonathan joined an advance team that had been on ground since July 4.

‘‘The objective is to ensure that the AU-EOM approaches its work with added professionalism and factual analysis of all aspects of the electoral process in Zambia,” the AU said in a statement. “At the second phase of the mission, the long-term experts will be joined by short-term observers from August 1-15, 2016. The short-term mission will be headed by Goodluck Jonathan, former President of the Federal Republic of Nigeria.”

Zambian election authorities said an estimated 6.6 million voters were expected to cast their ballots in the southern African nation of 14.5 million people.

Incumbent President Edgar Lungu is facing a challenge from nine other contestants.

The Zambia electoral commission temporarily banned campaigns in Lusaka due to rising cases of violence between supporters of the ruling Patriotic Front and the main opposition United Party for National Development.

Tax authorities also shut down the country’s largest independent daily, the Post, over claims that the paper owed substantial amount in unpaid taxes, a claim the paper’s editor, Fred M’membe denied, saying Mr. Lungu closed the paper to minimise challenge from the opposition.

Mr. Jonathan also led AU observers to Tanzania in October 2015. The outcome of the election was deemed fair and credible.

How my trip to U.S. is funded — Aisha Buhari