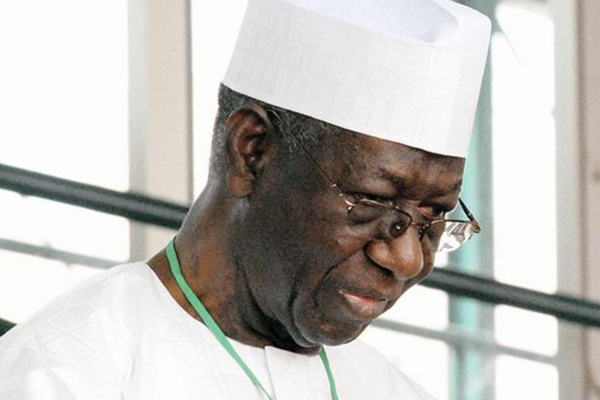 A former Chairman of the Board of Trustees of the Peoples Democratic Party (PDP), Tony Anenih, has tasked the Chairman of the party’s National Caretaker Committee, Ahmed Makarfi, to dissuade the PDP caucus in the National Assembly from participating in the alleged “ill-advised adventure” of removing President Muhammadu Buhari from office.

In a four-page letter to Mr. Makarfi, dated July 15, 2016, Mr. Anenih said he was persuaded that the time was neither right nor the reasons compelling enough to contemplate the impeachment of the President.

He urged him to personally lead the process of consultation with PDP members in the National Assembly, with a view to getting them to play a patriotic, rather than partisan role, at this time of national economic and social uncertainty.

The letter, titled: “The PDP Caucus in the National Assembly and the threat to impeach President Muhammadu Buhari” reads: “I am constrained to write this letter by my love for our great country and my long years of involvement in the pursuit of peace, co-existence and national development.

“I am concerned about the noises coming out of the National Assembly to the effect that some of our distinguished Senators and Honourable Members are contemplating a move to impeach the President.

“I feel even more disturbed that the PDP Caucus is being rumoured to be actively involved in this plan to “go for the jugular” of the Executive. The rumoured role of the PDP Caucus is, indeed, the main reason I have chosen to write this letter to you.

“I wish to appeal to you to use your noble office as the Chairman of the Caretaker Committee of our great party to dissuade our party members, in the National Assembly, from embarking on or participating in this ill-advised adventure. I am persuaded, Sir, that the time is neither right nor the reasons compelling enough to contemplate the impeachment of the President.

“I do not doubt that the National Assembly may have its grouse against the President, but I am sure that the options of consultation, dialogue and negotiation have not yet been exhausted. We should all assist in persuading our members to persevere in the pursuit of these options.

“I do not believe an attempt at impeachment, at this time, is in the best interests of the party, or the country. Such a move will create tension, instability and even crisis in our body-politic. It will unleash all those fissiparous forces which, in the last few months, have begun to gain momentum.

“Fundamentally, as the main opposition party, I believe the PDP should concern itself with an inward review of why Nigerians lost faith in us and in our party’s vision for Nigeria; our focus should therefore be on trying to figure out how we can once again regain this trust.

“As a party in opposition, what I expect is constructive criticism of the ruling party when it goes wrong. Playing an active role in the internal power struggles between factions of the ruling party is an unnecessary distraction, and an exercise that appears to promote personal agenda rather than the National Interest.

“I am not unaware that the times are hard; that Nigerians are groaning under the weight of unpaid salaries and astronomical increases in the cost of living, that ballooning security problems are increasingly threatening to rip apart the fabric of our national existence, and that Nigerians feel more divided today than they have ever felt, but it would be unfair to blame this President or this Government for all of these problems. Instructively, none of these problems was floated as justification for the threat of impeachment by the National Assembly.

“On the economy, it is a well known fact that all oil-producing countries are suffering from an economic down-turn because of the radical drop in the price of crude oil. As a mono-product economy, dependent on crude oil, there is no magic bubble that could have insulated us completely from the systemic shocks caused by the attendant loss of revenue.

“Rather than seek scapegoats, the situation demands that all our institutions, political parties and leaders should set aside all partisan interests, and work together to wade through these difficult times.

“It is, therefore, my wish and prayer that you, personally, lead the process of consultation with our members in the National Assembly, with a view to getting them to play a patriotic, rather than partisan role, at this time of national economic and social uncertainty.

“May God continue to bless you with the wisdom to lead our party to its manifest destiny.”

Ribadu hails Buhari’s ‘political will’ in fight against corruption