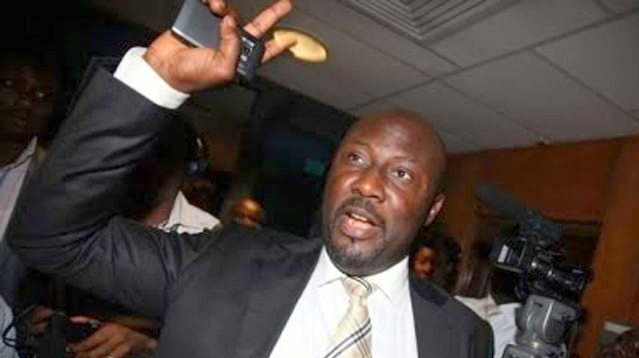 Dino Melaye, the senator of the ruling All Progressives Congress representing Kogi West, has confirmed his reported clash with Oluremi Tinubu, the senator representing Lagos central, during senate’s closed-door session on Tuesday.

Mr. Melaye, however, denied using some words reported by the media.

One source said quoted Mr. Melaye as saying, “Look this is not Bourdillon (referring to the famous Lagos residence of Mrs. Tinubu’s politician husband). I will beat you up, ….. impregnate you and nothing will happen.”

But addressing a press conference Thursday, Mr. Melaye said he never spoke about impregnating Mrs. Tinubu, whom he said had reached menopause.

He said he did not use “insolent, abusive, degrading and mannerless language against any Senator”.

“How could I have said I would beat and impregnate her at the same time?” Mr. Melaye asked.

Mr. Melaye however admitted using harsh words, but did not say what they were.

He said he reacted furiously because he was provoked.

“I did it because I am not a coward,” said Mr. Melaye, a former member of the House of Representatives, who frequently demonstrated unruly conduct during house sittings.

Giving details of Tuesday’s fight, our sources said trouble started when Mr. Melaye urged the Senate to descend heavily on members who had offered to serve as prosecution witnesses in the ongoing forgery case against Senate President Bukola Saraki and his deputy, Ike Ekweremadu.

The Kogi senator is said to have accused the senators of being used by the presidency to destabilise the Senate and warned them to be ready to face the consequences of their action.

“You should go and tell those who sent you that nobody, I said nobody, no matter who he is, can ever control this Senate,” Mr. Melaye was quoted as saying as he pointed at the affected senators, his face contorted in rage.

Our sources said Mrs. Tinubu, wife of former Lagos Governor Bola Tinubu, later addressed the senate, saying “I’m just wondering why whenever Senator Dino speaks in this chamber, he is always threatening people and behaving childishly and at times like a thug.

“I think he needs to know that every senator here represents their constituencies. And that there is no need to threaten anyone.

“We are seeking and working towards reconciliation, yet you are busy issuing threats.”

Apparently infuriated by the remarks, Mr. Melaye jumped from his seat and charged towards his Lagos counterpart.
“Look this is not Bourdillon (referring to the famous Lagos residence of Mrs. Tinubu’s politician husband). I will beat you up, ….. impregnate you and nothing will happen,” Mr. Melaye bawled.

Witnesses said as Mr. Melaye charged towards the Lagos senator, other senators, especially those from the South-West geopolitical zone, waded in and shielded Mrs. Tinubu from attack, and then calmed her down.

A few other senators also prevailed on Mr. Melaye to take it easy and let peace reign, sources said.

As electricity supply worsens, here are affordable ways you can power your homes