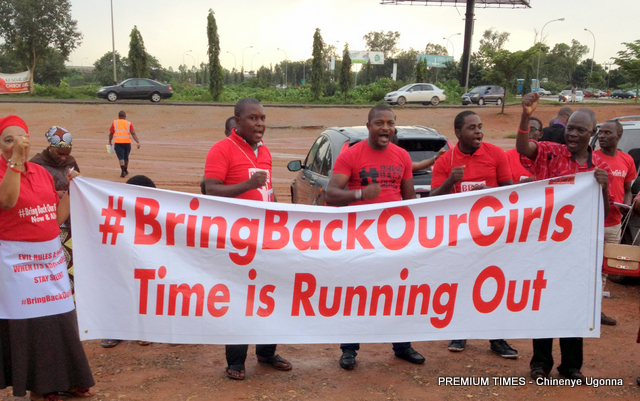 The Presidency on Monday tackled the #BringBackOurGirls group for criticising President Muhammadu Buhari regarding the rescue of the girls abducted from Government Secondary School Chibok in April 2014.

The BringBackOurGirls group had claimed in a recent statement that President Buhari had “broken all promises” made to the group about rescuing the missing Chibok girls and that the government had been “lackadaisical” in the rescue mission.

But in a statement Monday, the Presidency said the claims by the group were dispiriting and capable of causing collateral damage.

“While their intentions are honourable, perhaps the BBOG leadership have not considered the collateral damage which must inevitably follow its riveting and dispiriting claim that the President has “broken all promises” allegedly made to the group on this issue. Or that he has been “lackadaisical” in rescuing the Chibok girls,” Garba Shehu, the senior special assistant to the president on media and publicity, said in a statement. “The Federal Government’s focus has always been to free the Chibok girls alive and unharmed.”

The statement said while the group continued to campaign for the rescue of the girls, it should also note that the rescue of many other abducted citizens were also important.

The group, the presidency said, should also lend a helping hand to military families who had so far lost family members in the insurgency.

Mr. Shehu appealed to officials and members of the campaign group “not to waver in their support for the government in the war against terrorism and in the ongoing effort to free all Nigerian citizens taken captive by the Boko Haram terrorist group.”

The statement added, “The past year of this administration has seen the Nigerian military step up bombardment of the Sambisa Forest, a stronghold of the Boko Haram terrorist group, leading to the capture of hundreds of insurgents.

“Also, records from the Army show the rescue of no fewer than 15,000 captives, mostly women and children from the terrorists from February to date. In addition, dozens of communities that were previously under the control of the terrorists have been liberated, allowing thousands of previously displaced citizens to return home and resume their normal lives.

“Thousands of these women and children freed from captivity have also been reunited with their families.

“This huge number of rescued women and children may not be prominent names, and their disappearance may not have generated any massive media attention and campaign.

“However, their liberation is just as important as that of every other missing woman and child, and a testament to the devotion of our military personnel who daily risk life and limb in the effort to bring back every Nigerian citizen kidnapped by Boko Haram terrorists.

“Along with these ongoing efforts to rid our country of terrorists and terrorism, the Nigerian government is focused on the welfare and rehabilitation of rescued Nigerians, many of whom were found in a state of severe malnutrition and illness.

“The President is conscious always about the fact that terrorism in Nigeria is part of a global phenomenon. Since coming to office, his response to it has been firm and well considered.

“President Buhari will never make bogus promises or play to the gallery. It is misleading of anyone to preach that the Chibok girls are within an easy grasp. If the military under the President knew where they are held, they will bring the Chibok girls home today.

“The Presidency is open to renew cooperation with the BBOG group, international bodies, religious groups, social workers, and all others who are assisting in the field to ensure that those who have so far been rescued from Boko Haram captivity are given the support they need to make a full recovery and be reintegrated fully into society.

“Groups such as the BBOG can also lend a helping hand to military families whose losses need to be appreciated and focused upon.

“The life of every single Nigerian matters to this government and the security agencies, under the command of President Buhari, will continue to exert all its powers to ensure that every Nigerian is safe from the brutality of terrorists and terrorism.”