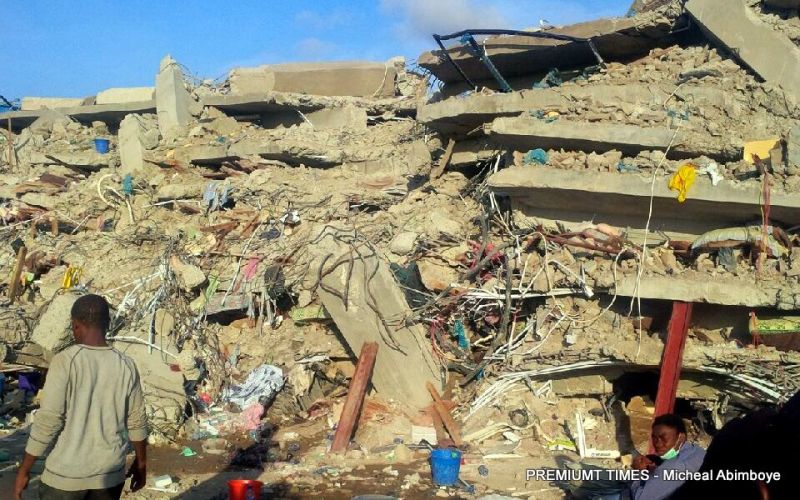 The trial of the two engineers charged over the collapse of a guest house belonging to the Synagogue Church of All Nations, took a new turn on Tuesday when a video of the tragedy was shown in court.

The video was shown in a crowded courtroom on the order of Justice Lateef Lawal-Akapo, after he admitted the footage as an evidence.

The footage showed an aircraft hovering above the five-storey building moments before it collapsed.

During the proceedings on June 27, the defence team led by E.L. Akpofure had objected to the footage being admitted as evidence because it was “computer-generated, irrelevant and a copy of the original”.

Mr. Akpofure had also noted that a witness for the state, Olutoyin Ayinde, a former Commissioner for Physical Planning and Urban Development, had in his evidence, said he could not identify the contents of the compact disc containing the footage until he was allowed to watch it.

However, at the resumed hearing on Tuesday, Mr. Lawal-Akapo dismissed Mr. Akpofure’s objection for lack of merit.

“I find no merit in the objections, they are overruled, the video clip and accompanying documents are admitted in evidence,’’ he ruled.

The judge said the prerogative of a court in admitting a document as evidence was its relevance.

He said, “For a document to be tendered in evidence the guiding principle is relevance and not custody; the questions to ask is whether the document is needed and admissible in law.

“Applying the above test, the document about to be tendered satisfies the above conditions and Section 54 of the Evidence Act.

“The argument of Mr Olalekan Ojo that the document is a secondary evidence is grossly misplaced.”

During the cross-examination of Mr. Ayinde by Mr. Akpofure, the former Commissioner, told the court that he visited the site of the collapsed building twice.

“I visited the site twice on Sept.14 and Sept. 21, 2014 and I cleared all unofficial rescuers from the site and left those rescuers recognised by the Federal Government and the Lagos State Government,” he said.

“On Sept. 22, my office gave instructions to the investigative agencies to probe the foundation of the building.”

Messrs. Fatiregun and Ogundeji alongside their companies — Hardrock Construction and Engineering Company and Jandy Trust Ltd and the trustees of the church are facing a 111-count charge bordering on gross negligence and criminal manslaughter.