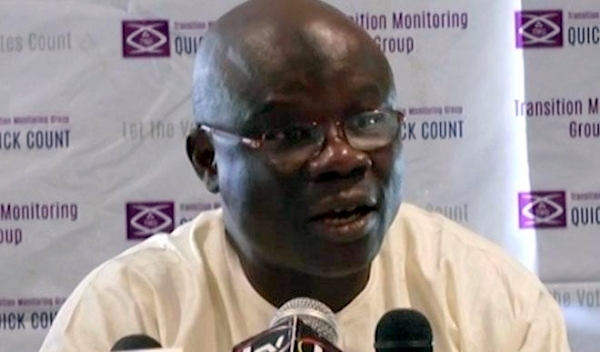 Members of the board of the Transitional Monitoring Group, a coalition of over 400 civic organisations working for the entrenchment of democracy and good governance in Nigeria, on Sunday passed a resolution suspend their chairman, Zikirullahi Ibrahim, from office over allegations that he mismanaged the organisation’s funds.

A copy of Mr. Ibrahim’s dismissal letter seen by PREMIUM TIMES said the good governance campaigner was relieved of his job because he claimed several reimbursements that were later found to be fictitious.

The letter was signed by eight out of 14 members of the organisation’s board.

An accompanying statement from Mr. Abel claimed the board had 14 members, four of whom sent notification letters explaining why they couldn’t make it to the meeting, which held at the Purple Tulip Hotel, Abuja.

Claiming a weekly reimbursement of N350,000, spending N80,000 for airline tickets from Kano to Abuja and diverting up to N58 million in United Nations Development Program grants to strictly projects in his native northwest zone are amongst the 14 allegations the board members levelled against Mr. Ibrahim.

“You are required to hand over to the vice chair all TMG property in your possession with immediate effect.”

The group also claimed that Mr. Ibrahim fired a staff, Lazarus Apir, without recourse to the organisation’s laid down procedures.

But Mr. Ibrahim, in a telephone interview with PREMIUM TIMES, denied the allegations, saying the action of the board members was “strange to the organisation.”

“I am not aware of these allegations because I have always reported to the group’s finances at our annual general meetings.”

Mr. Ibrahim said only a national congress of the TMG had the power to remove him from office.

“They are only making a mockery of themselves because the TMG is a strong institution that was properly constituted,” Mr. Ibrahim said. “So these guerrilla tactics of those purporting to have dismissed me from office are in vain.”

Mr. Ibrahim acknowledged firing Mr. Apir, but said it was because he “breached employee code of conduct.”

“We have a 16-member board and eight cannot take such a drastic action,” Mr. Ajanaku said. “Their action is in complete nullity and I will urge the general public to ignore the jokers and continue to see TMG as a honourable organisation that will continue to work for a better Nigeria.”