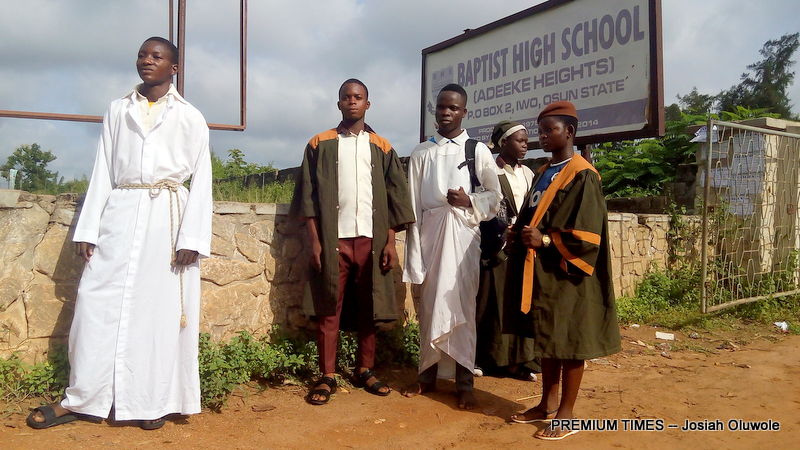 ‎The Baptist Girls High School in Osogbo witnessed a heavy presence of security operatives on Wednesday as the Christian Association of Nigeria in Osun State began a joint prayer session to resist the court judgment approving the wearing of hijab in Christian schools.

The security operatives were also present at the Baptist High School, in Iwo, where CAN officials almost had a clash with the security men as they ensured that robe-wearing pupils were not turned away from classes.

It took the intervention of the Oluwo of Iwo, Abdul Rasheed Akanbi, to keep the situation from degenerating into a crisis.

Osun state is currently embroiled in a controversy over the wearing of hijab by Muslim female students to schools, especially those established by Christian missionaries.

A recent court judgement approves the use of hijab, however.

On Wednesday, despite threats by the state governor, Rauf Aregbesola, to expel students who “violate school rules”, the students continued to wear their robes and church garments to school.

‎CAN’s Vice Chairman, Moses Ogundeji, told journalists in Osogbo on Wednesday that the association would not rescind its directive to christian students to wear choir robes and church garments to schools, so long as the government implements disputed court judgement.

“We are appealing the judgement, but christian pupils will continue to wear church garments to their various schools, not minding the state governor’s warning to expel them,” said Mr. Ogundeji.

He ‎said the prayer was meant to reject the court judgment on hijab and ‎other “Islamization” plot in the state.
‎
He added that the prayer was also meant to seek peace from God and ‎to “nullify anti-Kingdom laws and dealings with satanic forces” that were ‎tormenting the state for the past few weeks.
‎
“We don’t want crisis in Osun because of ‎hijab issue. Already the state is being oppressed by the demonic ‎spirit and evils as well as the country at large,” Mr. Ogundeji said.
‎
He said although CAN was resorting to prayers to resolve the crisis, any attempt by the government to expel any Christian pupil or student, for wearing robes would result in having all the students in public schools sent packing.

According to him, the prayer will ensure that Osun ‎State is delivered from the power of satanic forces and oppressors, and that all powers set to destroy Osun State will be ‎destroyed by God.

“The country has no rest from the hands of Boko ‎Haram, Niger Delta avengers, Bororo herdsmen. Therefore let there be peace ‎in Osun and let the state be free from the shackles of evil and‎ oppression,” Mr. Ogundeji said.
‎
He however, described the presence of security personnel around the prayer venue as an embarrassment.‎

Blasphemy: We won’t tolerate further killings of Christians – CAN