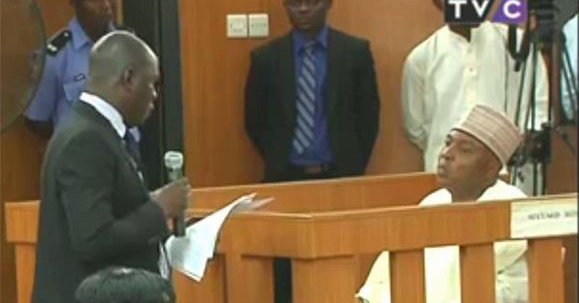 Senate President, Bukola Saraki, docked by the Code of Conduct Bureau .. in 2016

LIVE UPDATES: Saraki returns to tribunal after weeks of adjournments

The trial of Senate President, Bukola Saraki, is continuing today, Tuesday, at the Code of Conduct Tribunal, after weeks of rescheduling at the instance of prosecution team.

Mr. Saraki returned to the accused box this morning for continuation of his alleged false and anticipatory assets declaration proceeding before Justice Danladi Umar.

The tribunal hopes to conclude the cross-examination of prosecution witness, Michael Wetkas, this week.

The cross-examination began in April, a span that prosecution team has continued to express its dissatisfaction about.

Both teams are currently sparring over the significance of questions being asked by the defence.

Paul Usoro, counsel to Mr. Saraki, has been grilling Mr. Wetkas, an EFCC official, for weeks, over evidences he tendered against the top lawmaker before the court.

Stay with us as we bring you live updates of key moments in the court.

12.42: A chairman of the tribunal, Mr. Umar, is angry over “rude” comments by senators and other supporters of Mr. Saraki. The individuals, seated in the court gallery, had repeatedly asked Rotimi Jacobs, prosecution counsel, to “sit down”.

This infuriated Mr. Umar, who said the senate president’s supporters’ conduct was becoming unbearable in his court, warning that they should “keep quiet”.

“If I hear anybody ask the counsel to sit down, I will deal with the person and nobody can question me about it. In fact, I will hold the person in contempt and sentence the person to hard labour and nobody will question me.”

12.59: A similar scenario had played out during the hearing on April 21 when Mr. Umar threatened to throw out Ajibola Oluyede, a counsel to Mr. Saraki. He also said then that he’d hold in in contempt of court. He did none.

Cross-examination of Mr. Wetkas continues over the discrepancies in the Maitama property Mr. Saraki was alleged to have purchased in 1993 but which he allegedly failed to declare in 2003 when he became governor in Kwara.

13.14: Lead counsel to Mr. Saraki, Kanu Agabi, is requesting an adjournment to allow him see his doctor.

The tribunal is now weighing an adjournment for another week, maybe next Wednesday.

Mr. Jacobs strongly objects this, saying the court should finish with Mr. Wetkas this week as planned.

“Take it easy and understand that you can’t overrule the court, Rotimi” says William Atedze, co-chair of the tribunal. “If any of us drops dead now, this trial would continue it.”<

The defence, prosecution and the tribunal chairmen are weighing the option of adjourning.

Mr. Agabi said Mr. Jacob used to be his boy back in the day and that they've eaten from the same pot before. Whew!

13.28: The Code of Conduct Tribunal has adjourned the trial for another week to give Mr. Agabi time to see his doctors and take medication.