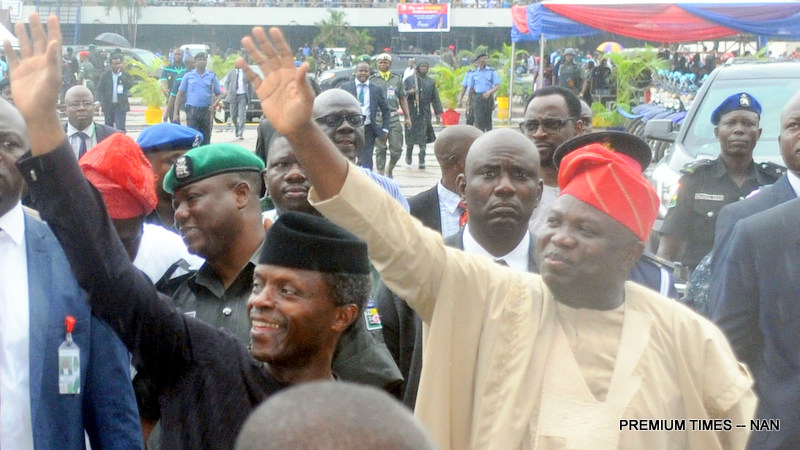 Vice President Yemi Osinbajo (L) and Gov. Akinwunmi Ambode of Lagos State acknowledging cheers from the crowd on arrival at Tafawa Balewa Square venue for the Inauguration of Some Security Equipment, during the working visit of the Vice President to Lagos State as Representative of President Muhammadu Buhari on Monday (23/7/16). 3750/23/5/2016/BOA/MA/NAN

Vice President Yemi Osinbajo on Monday assured Nigerians that the price of petrol, which was recently increased from N86.50 to N145 per litre would soon reduce.

Mr. Osinbajo, who was addressing a cheering crowd of supporters of the ruling All Progressives Congress at the Tafawa Balewa Square in Lagos, was representing President Muhammadu Buhari during a two-day working visit to Lagos.

Mr Buhari announced on Sunday that he would be represented by Mr Osinbajo.

The presidency explained that Mr Buhari could not make it to Lagos due to scheduling difficulties.

Presidential spokesman, Garba Shehu, however said the President would visit the state after Ramadan.

According to Mr. Osinbajo, due the liberalisation of the downstream sector, “every Nigerian can now bring petrol and supply as long as they meet the PPMC (Pipeline and Product Marketing Company) regulations.”

He said that would allow the forces of demand and supply to force the current price of the product downward.

The Vice President, who apparently was referring to the hardship in the country caused by hyper-inflation and job losses, appealed to Nigerians to be patient with the Buhari administration as the “country is on the path to progress.”

“This country is going to be a great nation but there is a lot of readjustment to be done. My President has asked me to assure every Nigerian that we are on the path to progress,” he said.

He said the government had made provision in its N500 billion social security plan to take care of the most vulnerable Nigerians.

He said the government was paying particular attention to vocational training, soft loans to market women and traders that would be disbursed through their associations.

He also said the administration was working to make the country a technology power house in the continent by the provision of six technology hubs in the country.

He further declared that the government was working to attain self-sufficiency in the production of rice and wheat by 2018.

The Vice President, who commissioned 140 patrol vans and 335 Power bikes provided by the Lagos State government to be distributed to security agencies in the state, said he was impressed with what he saw in the state.

He praised the state governor, Akinwunmi Ambode, for taking the lead in the provision of infrastructure at the local governments and the security of lives and properties in the state.

“So much attention has been paid to security and safety,” he said.

“The Lagos state governor surely deserves commendation for the good work he is doing, it is what other governors should also emulate to make life better for people.”

He said the federal government would continue to support Lagos in every way possible.

“Lagos State must benefit even more than before,” he said.

In his remark, the Lagos Governor said it was quite excited receiving the president, ably represented by his Vice President, adding that projects like the LASEMA Rescue Unit being commissioned were all targeted at improving the well-being of Lagos residence.

“This facility has been established to respond to all kinds of emergencies out of this specially designed dispatch centre and it is the first of its kind in the country,” Mr. Ambode said.

“Although it is imperative to state that the intent is to prevent emergencies and mishaps, we may not be able to completely eliminate them. As a result we must be ready to swing into action and save lives and property whenever these unfortunate events occur.

“Many people lose their lives and sources of livelihood, not from the initial incident, but from the delay in the response time due to inadequate resources and training,” the governor added.

Dino Melaye weeps in church, says, ‘I was tempted to seek diabolical solution during 2015 election’