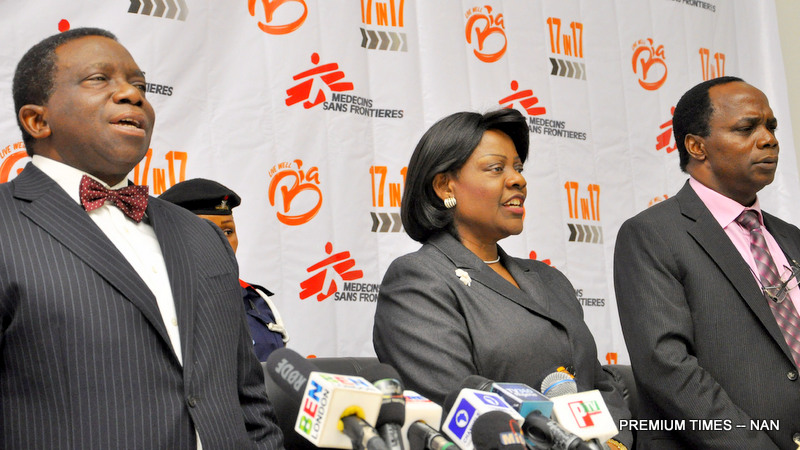 EDITOR NOTE: This story has been updated. There were some inaccuracies in the earlier version. Stevens Johnson Syndrome is not a new disease, and is not contagious. We have been advised that neither the minister nor Dr. Olanrewaju Falodun said so at the event.   The error is that of our reporter.  We apologise for the mix-up.

A Nigerian, Fadeshola Adedayo, on Friday commenced a 17-day marathon from Abuja to Lagos to call attention to the health condition known as Stevens Johnson Syndrome, an unusual allergic reaction.

“Stevens Johnson Syndrome is an immune complex mediated hypersensitivity reaction that typically involves the skin and mucous membranes and was first described in 1922 by Albert Stevens and Frank Johnson,” said Dr. Olanrewaju Falodun a Senior Consultant Physician/Dermatologist at the National Hospital, Abuja.

SJS is a rare and unpredictable reaction, and is also a minor form of toxic epidermal necrolysis with less than 10 percent body surface area involvement, the consultant said.

Having lost his older brother to the condition in 2012, Mr. Adebayo will make stopovers as he raced along, sensitising as many people as possible about the syndrome and the need to avoid self medication.

Self medication is believed to be one of the causes of the condition.

Mr. Adebayo’s brother, Mr. Adeoshunola (a medical doctor), had gone for community service in Lagos, and in the course of his work, he sustained a needle stick injury while managing a patient.

While going through treatment,  he later developed an uncommon reactions that unfortunately led to his death.

Mr. Adebayo said he was embarking on the marathon to call attention to the condition and ensure that Nigerians understand the danger of self medication.

The Minister of Health, Isaac Adewole, was part of the ceremonial commencement of the marathon as he raced within the Abuja metropolis with other Nigerians.

Briefing journalists afterwards, Mr. Adewole said, “We have to find a means to communicate with Nigerians so they should all be aware of this dangerous disease and it is the sole business of government to enlighten the society by trying to increase their awareness, knowledge and to improve their quality way of life.”

He confirmed that two cases had so far being handled at the Abuja National Hospital, saying one patient already passed while the other was still undergoing treatment.

He said the incidence was higher in Africa due to extensive use of herbal preparations and the prevalence of HIV.

He however said the cause of the disease remained unknown in a quarter to half of cases but that self-medications appeared to be one of its causes.

He advised Nigerians to avoid misuse of drugs, while individuals with previous drug reactions should always inform healthcare practitioners so that in future they would be able to predict who is at risk of the disease using genetic screening.

Here are ways Mr. Falodun said SJS could be managed by hospitals: