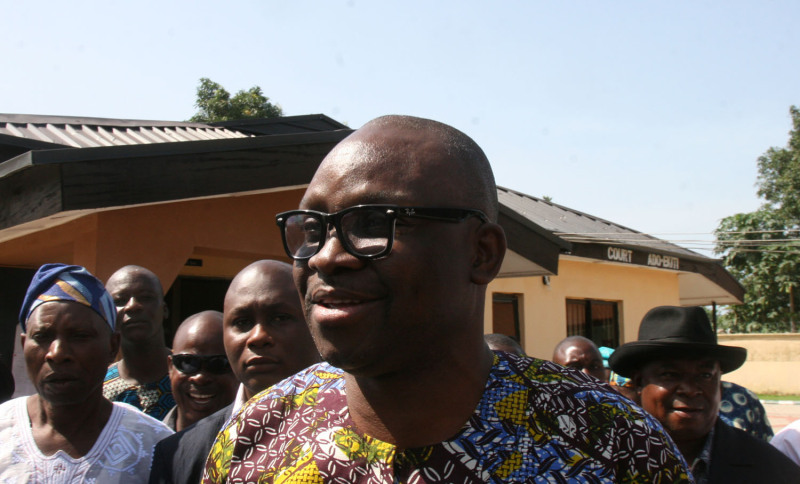 The Governor of Ekiti State, Ayodele Fayose, has dismissed claims that over 200 Chibok school girls were truly abducted by Boko Haram militant group and have been missing since.

Mr. Fayose, in a video clip posted on YouTube, Wednesday, said the girls would never be found because “What is not missing, you cannot find”.

Mr. Fayose, according to the video, was speaking recently to some women in Ekiti, at a workshop organised by an NGO, Women Arise.

The governor said the #BringBackOurGirls campaign was a hoax, designed to stop former president Goodluck Jonathan from winning re-election.

“If you want to use it to get some people out of office, you have succeeded in doing that,” he said. “But you must equally look for those girls, if indeed they are missing.

“It was a strategy to get some political push- ups. That is why you can never find them.”

Mr. Fayose, who said genuine human rights organisations were no longer in existence in Nigeria, mocked at the #BringBackOurGirls campaigners, alleging that some of them had been settled with political appointments.

“I was laughing at this people when they come out with ‘freedom for our girls’,” the governor said, eliciting laughter from the crowd. “Or is it ‘where is our girls?’

“Is it trailer that they used to pack 200 girls away or luxurious bus? Who is fooling who?

“I like to tell people the truth, if you don’t like you can go to (the) police station,” Mr. Fayose said.

Below is full transcript of the video.

I was laughing at this people when they come out with look for our girls or where is our girls? I don’t know whether even those girls are missing. Write it down. Quote me, Pressmen. Quote me; I’ve not changed my name. Who is fooling who?

Is it trailer that they used to pack 200 girls away or luxurious bus. Who is fooling who? If you want to use it to get some people out of office, you have succeeded in doing that. But you must equally look for those girls if truely they are missing.

Most of they have become political appointees or they are looking for political appointments, not until we start shouting: where are you again? They now started visiting the Villa. They want to go and do DNA test in Cameroon. Who is fooling who? We are not all 419 activists. No o! Not what you eat makes you fate. You’ll see a fat man and he’s still hungry. And you see a skinny person who says I’m full, I’m content.

I don’t know whether there are missing girls, because no indicator has shown the realities of the game. It was a strategy to get some political push ups. That is why you can never find them. You can never find them. What is not missing you cannot find. I like to tell people the truth, if you don’t like you can go to police station.

When I left office, I was the one who went to EFCC myself. They were not looking for me. I was detained for almost 50 days; my wife was detained; we are back in government house. Those who plotted us out of government now they eat the crumbles at our table. To God be the Glory. We are not perturbed by this pettiness in our country. I’m concerned by the activities of human rights groups.

When my House of Assembly member was detained for 18 days. Why would you take our rights for political for reasons of ego? Why would you take the rights of our people? Police came to town yesterday. At the pointing of APC people to come and be arresting our people and we still have human rights activists. And we have viral opposition. This Nigeria belongs to us and our father, and our father, and our father’s father, father. When the going is good for them they will praise you. When the going is not good for them they will say you are a devil. If you like demonise me I will demonise you back. I don’t know the governor that will say he wants to slap me, if you slap me I’ll slap my own back. Before you beat me sef I’ll slap my own back. That’s the truth.

I don’t need police to walk in my state. If police like let them carry their people. SSS carry their people. You are not popular enough that’s why you cannot walk in your state. Where are human rights activists in the killings in those states in the South South? Coldblooded. When people are displaying evil openly.

Where are the human rights activists? We must talk about government in power providing cover for criminals. When a court gave an order that the police or security agency must arrest somebody and bring him to court, you are now providing cover for that person. You are now using that person to molest innocent people that is not leadership. That is autocracy.

My name is Ayo Fayose, Peter the rock! When rock falls on you, you are in trouble. When you fall on rock, you are in trouble. And I make it very clear, any government that rises against me that government must come down. If I’m standing on the ground that God Almighty put me here no man can shake me. You will only make me more popular. By engaging me you make me more popular and get sympathy.