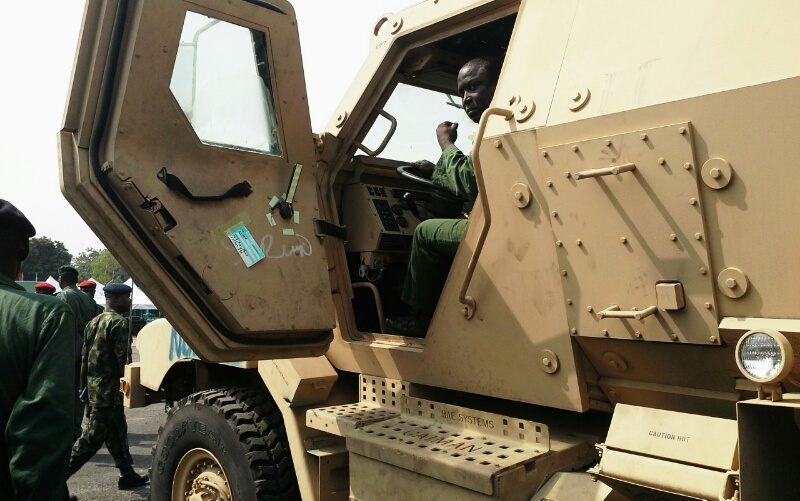 One of the armoured cars handed over to the Nigerian Army

At a brief ceremony in Lagos, the US government said the donation was part of its commitment to assist Nigeria in its war against insurgency.

‎”For many years the Nigerian armed forces has been a strong partner of the United States,” said Patrick Doyle, a Colonel and the US Defence Attaché to Nigeria.

“We have asked for your support in many endeavours, in particular throughout West Africa and you have responded.

“I believe United States government security cooperation commitment is second to none‎. We have provided extensive training programmes, logistical supports, and equipment to the Nigerian armed forces and we will continue to do so.”

The armoured vehicles, which arrived the country on New Year day, were part of the US government’s Excess Defence Articles Programme, a programme designed to transfer excess US military equipment to partner nations.‎

Eight more of the vehicles are expected to arrive the country soon.

Mr. Doyle said half of the 24 vehicles are in good working condition but will need “minor work.”

“‎When the Nigerian army inspected the vehicles a few months back, they selected the best vehicles that they could find,” he said.

There are many land mines buried by the Boko Haram terrorists across the north-east.

Last August, two soldiers were killed in Dikwa, Borno State, after a land mine they stepped on exploded. Two other soldiers sustained serious injuries while an armoured personnel carrier was destroyed in the blast.

‎Barry Ndiomu, representing Nigeria’s Defence Minister, said the vehicles are what is needed to prosecute the war in the north-east.

“We express our most profound gratitude for the gift of Mine Resistant Ambush-protected vehicle to the Nigerian Army. It couldn’t have come at a better time especially considering the challenges that confront our armed forces in the north east,” said Mr. Ndiomu, a Major-General.

“We appreciate what you have done, although like Oliver Twist, we would appreciate if you can do even more.”

Mr. Ndiomu noted that some of the armoured vehicles are not ‎serviceable and requested for help from the US to procure their spare parts.

“The defence adviser has actually told me about certain steps we need to take. As soon as I return to Abuja‎, I’ll pass this information on to the appropriate authorities so we can initiate the process.”

The 24 armoured vehicles are worth $11 million (brand new ones), according to Mr. Doyle, and the other expected eight are valued at $7.5 million.

‎”The repairs of the vehicles is up to the Nigerian government to do that,” he said.

“They can repair them on their own and they have the facilities to do that, but of course the spare parts are very particular to these vehicles so the Gene‎ral and I have been discussing and we have been in discussions with the army previously and we were working modalities on how we will get those parts to them.

“They will have to order those parts from the United States and we will work out those conditions and how they will do that but when you say they will pay the United States, the easiest way to do that is to open a government-to-government case, where we can then work with them to ensure they get the correct parts and get them in a time and manner and from the correct manufacturers and the parts they actually need.”

Mr. Ndiomu also said the vehicles would be moved “as soon as possible” to the Nigerian Army Electrical Maintenance Engineers workshop in Bauchi.

‎”They will make the necessary assessments and I believe that ongoing discussions with our American partners, the spare parts will be made available and they will be repaired.”

Bayelsa Governorship: My victory over Seriake Dickson is sure — Timipre Sylva