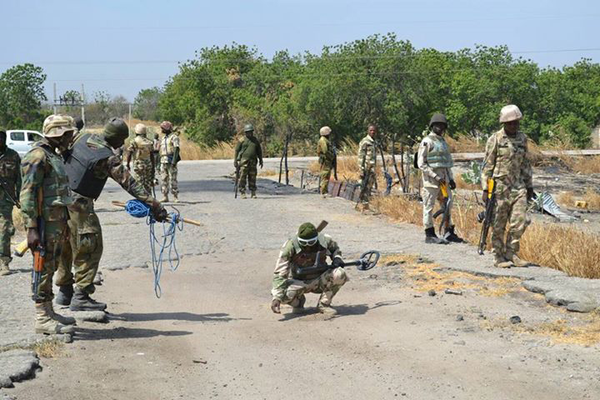 The Nigerian Army said on Sunday that it arrested 7 Boko Haram bomb specialists.

In a statement sent on behalf of the Army by PRNigeria, the army spokesperson, Sani Usman, said the suspects were arrested in Kaduna “after painstaking surveillance and proactive intelligence operations over period of time.”

Read the Army’s full statement below:

Another catastrophe was averted in Kaduna State and other contiguous areas when troops of the Nigerian Army arrested 7 suspected Boko Haram terrorists bomb and Improvised Explosive making Devices (IEDs) specialists.

The terrorists were arrested in Kaduna after painstaking surveillance and proactive intelligence operations over period of time.

From all indications, the suspects were in Kaduna to conduct suicide bombings, kill and maimed innocent citizens in the state and other surrounding areas during the festive period. Recall that recently in Maiduguri some of them were arrested while trying to detonate IEDs carried in food containers in public places.

The arrest of these suspects would no doubt assist in the fight against terrorism in the country, more so as the military have technically defeated the Boko Haram terrorists in the field, the terrorists have resorted to attacking soft targets through suicide bombings, IEDs and harassing attacks on isolated communities.

Therefore, the public are please requested to continue to be more vigilant and security conscious by reporting suspicious persons and movements to the security agencies.

This request has become necessary because the terrorists have resorted to mingling with the public across the country after sensing the futility of their encounter with troops in the north east. Therefore, they adopt other methods of perpetuating violence in the society.

Nigeria to import petrol beyond 2016 – Kachikwu