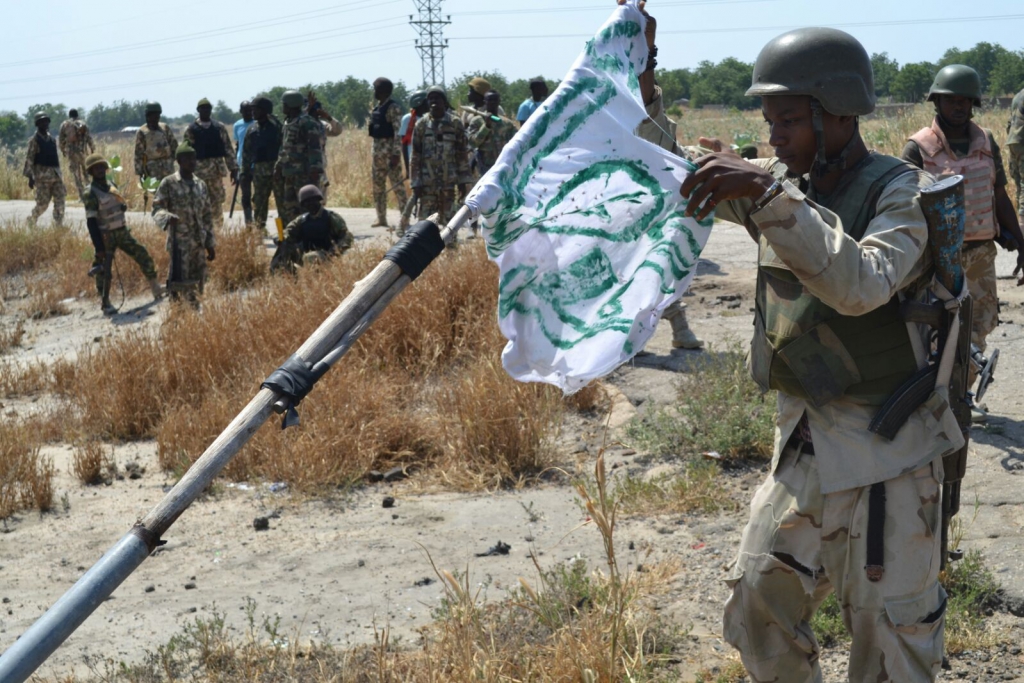 FILE PHOTO: A Nigerian soldier pull down a Boko Haram flag as a mark of victory

The Nigerian Army said on Friday that it had cleared nine more suspected Boko Haram terrorists camps in its operations in Borno.

The Media Coordinator of Operation Lafiya Dole, Tukur Gusau, said this in a statement in Maiduguri.

“In a major boost, troops of 115 Task Force Battalion under 28 Task Force Brigade while on clearance operations between Nov. 4 and 5, cleared nine more terrorists strong holds around Lassa axis.

He added: “During the offensive, four Boko Haram terrorists met their waterloo in the hands of gallant troops of the Nigerian Army.

“Some of the terrorists fled, abandoning their weapons.”

He said the military also carried out offensive along Korede area in Damboa LGA.

“In a related development, troops of 25 Brigade, on Thursday, conducted another offensive operation along Korede axis in Damboa LGA.

“In the operations, three motor cycles suspected to be used during Sunday’s attack on Azir village, were recovered along with stolen food stuffs from the village.

“Terrorists observation posts were destroyed in a high ground in Korede.

“Our troops continued to dominate roads leading to Azir, Wajikoro, Damboa and Biu towns to deny Boko Haram terrorists any possible freedom of activities in the area.

“The fighting spirit of the troops remains very high,” he said.