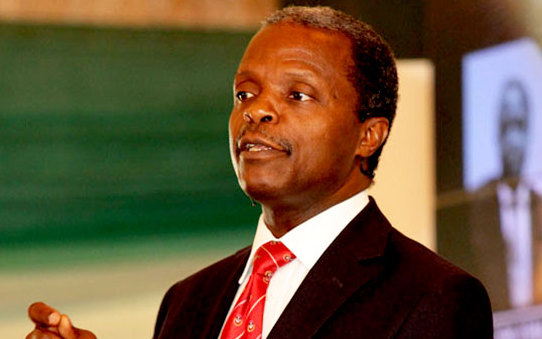 The Federal government on Wednesday joined in the facilitation of the quick restoration of civilian rule in Burkina Faso.

That happened a day after President Muhammadu Buhari hosted an extraordinary session of ECOWAS’ Authority of Heads of State and Governments in Abuja, where the decision was taken to ensure the termination of last week’s military coup in the West African nation.

Vice President Yemi Osinbajo, who represented President Buhari Wednesday in Ouagadougou, among the select group of West African leaders who were in the Burkinabe  capital, said the leaders were there “to convey the recommendations agreed by ECOWAS leaders in Abuja, and we have witnessed the reinstatement of President Michel Kafando as the transition President of Burkina Faso”.

Speaking with reporters in the capital city after series of consultations, meetings and a formal restoration of power ceremony, Mr. Osinbajo stated that the restoration of civilian authority in Burkina Faso after last week’s military coup conducted by the country’s presidential guards (known as the Presidential Security Regiment or RSP) “is a very good sign, a positive thing.”

He observed that ECOWAS played a significant role in the process that made the restoration possible.

He said, “As you know, President Kafando had been detained by the RSP, -the presidential guard-but they have now stepped down as you can see, and they are now part of the process to ensure that the transition goes on.”

He continued: “What we have seen today is how ECOWAS states came together basically to agree and see to it that President Kafando was reinstated and now that has been accomplished.”

Praising the leaders of ECOWAS, including President Buhari, President Boni Yayi of Benin, and the current Chairman of ECOWAS, President Macky Sall of Senegal, alongside all the leaders in the West African region, the Vice President said “now we are all looking at how to advance the transition process here in Burkina Faso”.

He said while there are still difficult issues to be resolved as fallouts of the coup crisis, it is clear that progress would continue, judging from the fact that the people are determined, all the groups involved are now engaged in the process and are cooperating.

Mr. Osinbajo reiterated Nigeria’s continued brotherly support for Burkina Faso, while also commending the international community for coming together to condemn the coup.

According to him,”I think it is very clear going by the ECOWAS Supplementary Protocol on Democracy and Good Governance and the legal instruments of the African Union, that coups are no longer fashionable and no longer acceptable. In fact, it is punishable to take power by force. As soon as this coup took place, the entire ECOWAS, AU and the entire international community rose with one voice against it.”

After Tuesday’s summit in Abuja hosted by President Buhari, ECOWAS selected a group of six leaders, one each from Nigeria, Benin, Senegal, Togo, Niger and Ghana to visit Ouagadougou and deliver the recommendations of the West African nations towards solving the disruption of civil transition programme in Burkina Faso.

President Yayi of Benin was named as facilitator, while Nigeria was represented by the Vice President.

In what included series of talks and events all day Wednesday, leaders from the six West African nations met with the RSP, Burkina Faso military and civil leaders and presided over the formal ceremony to effect the restoration of power  by the transitional president and the exit of presidential guards led by General Gilbert Deirdre.

On his arrival yesterday morning-September 23- in the Burkinabe capital, Vice President Osinbajo was received at the Ouagadougou Airport by General Deirde, while he was escorted back on return through the same airport by the restored transition president, Mr. Kafando.

Man arrested with cocaine says he was ‘under a spell’