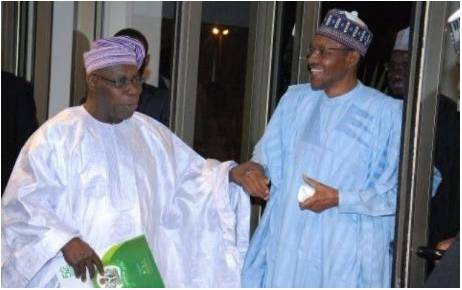 Buhari in closed-door meeting with Obasanjo

President Muhammadu Buhari on Tuesday met with former President Olusegun Obasanjo at the Presidential Villa, Abuja.
The two leaders met privately for about one hour.

It was Mr. Obasanjo’s second visit to Mr. Buhari since the latter assumed office on May 29.

Mr. Obasanjo, who ruled Nigeria as civilian president between 1999 and 2007, visited Mr. Buhari in August.

The former president refused to speak on the subject of Tuesday’s meeting when approached by journalists.

In his usual jovial manner, he retorted Comot joo, “go away,” as Mr. Buhari accompanied him to his vehicle at about 4.17 p.m.

The president had last month named Mr. Obasanjo his Special Envoy to resolve the crisis in Guinea Bissau.