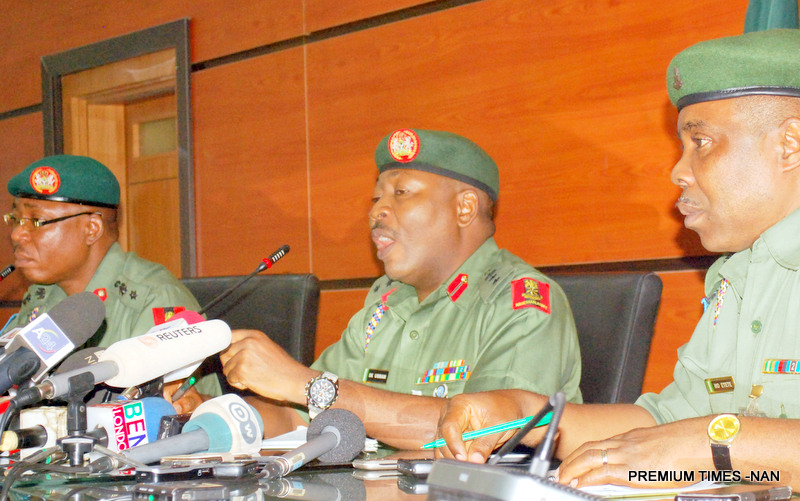 The Nigerian Army has affirmed its stand on ending terrorism in three months as directed by President Muhammadu Buhari.

The Acting Director of Army Public Relations, Col. Sani Usman, stated this while giving an update on the counter-insurgency operation, at a news conference in Abuja on Thursday.

Mr. Usman said the recent offensive operations carried out by combined forces, had decimated the central command and leadership base of the insurgents.

He said the military offensive had left the terrorists with no formidable force.

Mr. Usman said the objective of ending the reign of terror in the region in the shortest possible time, was not only feasible, but a reality that Nigerians would soon come to live with.

He said troops involved in the operations have been directed to pursue the insurgents to their last known hideout in line with the general objective.

“I have no iota of doubt in my mind that our troops will wipe out the insurgents in the shortest possible time and we are committed to this target.

“You are aware that our troops recaptured Gamboru Ngala last Tuesday and are now consolidating, mopping up and preparing for the next offensive against the terrorists.

“It is gratifying to note that most of the terrorist group leadership, has been decimated, while foot soldiers are abandoning their masters, burying their weapons in the forest and seeking solace.

“It is the achievements from harmonised efforts that have confirmed our stand that the insurgency would be ended as soon as possible,” he said.

Mr. Usman attributed the feat attained so far, to the strengthened collaboration among the security agencies, especially the synergy between the army and the air force.

He said officers and personnel of the Nigerian Air Force had exhibited the highest level of professionalism to the admiration of all in the present offensive against the insurgents.

The director cited the professionally executed air reconnaissance and provision of logistic support to ground troops in remote locations, among others, as some of air force’s invaluable support to the operations.

“I would like to acknowledge the commendable role the Nigerian Air Force plays in the fight against terrorism, alongside sister service and other security agencies.

“In addition to providing water and airlift of other logistics to the war front, the air force has been a force multiplier as troops are confident that they would receive quick medical attention when necessary,’’ he said.

He said the pressure exerted on the insurgents by joint forces led by troops of the Nigerian Army, would be sustained until they were totally wiped out from the nation’s territory.

The director assured that the military would do its part by ensuring that recaptured territories were secured well enough for the government to commence reconstruction work.

Mr. Usman, however, appealed to the general public to sustain the level of cooperation in order to expeditiously end insurgency in the affected parts of the North-east.

President Buhari had given the military three months within which to end insurgency.