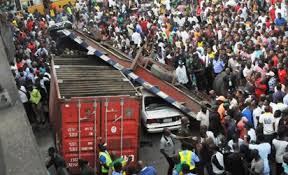 Three people died Wednesday after an unlatched articulated vehicle carrying a 40-foot container fell off a bridge at Ojuelegba, Lagos.

The horrific incident, which occurred during the 5‎ p.m. rush hour, saw two vehicles mutilated under the weight of the container.

Witnesses said the driver of the trailer lost control of the vehicle on the bridge before it fell over.

“People were screaming and before we knew it, it had landed on those two vehicles moving along the road,” said a witness who did not want to be named.

“It would be difficult for any of the occupants in those vehicles to survive.”