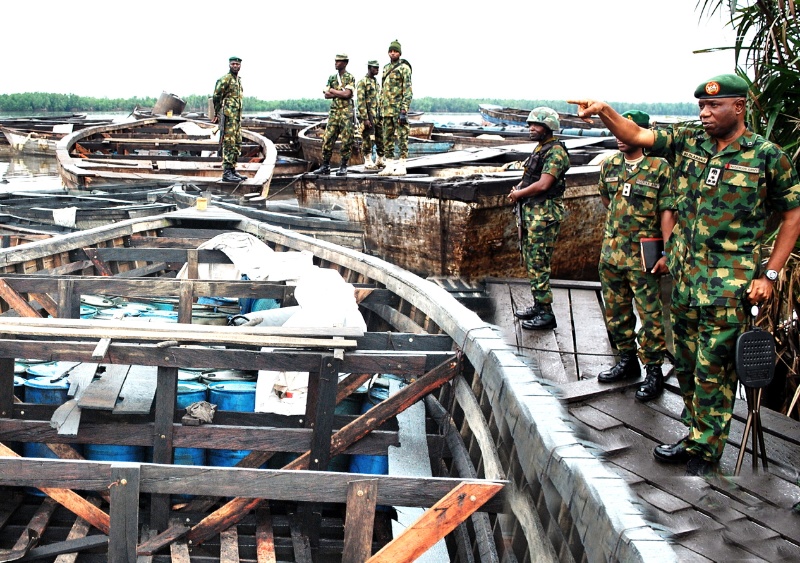 The Nigerian Army says it has uncovered a massive illegal oil bunkering site located one kilometre along the Nigerian Ports Authority (NPA) in Port Harcourt.

Stevenson Olabanji, a Brigadier General and Commander of 2 Brigade of the Nigerian Army, Port Harcourt, told the News Agency of Nigeria (NAN) on Wednesday in Port Harcourt that thousands of litres of illegally refined diesel were discovered at the site.

He said that army operatives were immediately deployed to the site at Makoba Beach, which is two kms away from the Rivers State Government House.

“About 16:40 hours on Monday, we got an information that some illegal bunkering activities were going on along Makoba Beach.

“On arrival, our personnel discovered illegal activities which involved bunkering of illegally refined petroleum products and lifting of diesel to local boats.

“At the site, we found more than 5,000 drums loaded with illegally refined diesel; four tanker trucks containing 132,000 litres of diesel combined, and a barge with 165,000 litres of stolen diesel.

“This discovery is unprecedented because since we started our operations 10 days ago, this is about the biggest that we have uncovered.”

Mr. Olabanji said that additional 150 drums, loaded with about 3,150 litres of diesel, were also discovered in 21 Cotonou boats.

He said 13 suspects were arrested at the scene of the illegal activity.

He said the illegal bunkering dump had not yet been set ablaze, in line with the Joint Task Force mandate, because of its closeness to residential buildings and the NPA.

“Our mandate requires us to destroy the site in situ, but we cannot do this because it will degrade the environment and affect residents since it is situated in the heart of Port Harcourt.

“Our plan is to move them to a safe location for destruction.”

The commander said that preliminary investigation had already begun to unravel sponsors of the activity, adding that the 13 suspects would be handed over to the relevant authorities for further investigation and prosecution.

Mr. Olabanji, while urging oil thieves to desist from the sabotage of oil and gas installations, assured Nigerians that the JTF would not rest until it rids the state of illegal bunkering activities.

“Let it be known that the army will not and will never tolerate illegal bunkering in our area of responsibility,” he assured.

Mr. Olabanji called on the public to provide the JTF with timely information which could lead to the arrest of oil thieves and pipeline vandals.

AFCON 2017 Qualifiers: Oliseh admits being in “tight corner” ahead of Tanzania clash