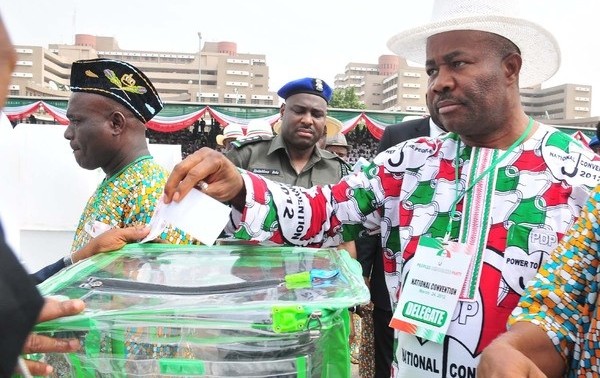 Godswill Akpabio confessed to rigging the 2007 senatorial primary elections in his state.

A former Governor of Akwa Ibom State, now Senate Minority Leader, Godswill Akpabio, escaped death Monday morning after his car got involved in an accident along the Airport Road in Abuja.

PREMIUM TIMES learnt that the accident occurred near the Bolingo Junction close to the Ship House, Abuja.

A witness said Mr. Akpabio was moving in a convoy of vehicles towards the City Gate when his vehicle ran into another car.

“My wife and I were coming from the NNPC Mega Station and we stopped at the traffic light by Bolingo Hotel Junction. When the green light showed and we made to move, there was this siren blaring Mercedes Benz jeep that came from the town and almost crashed onto my car. I don’t know how we dodged but another that was behind the jeep hit the car behind me and tumbled on its side.

“I and my wife rushed out of our vehicle and helped the driver bring out his boss. When we brought him out, we found that it was former governor Godswill Akpabio.

“At the time we brought him out, the siren was still blaring. We put him in the other vehicle and he was rushed to the National Hospital.”

The witness said Mr. Akpabio was badly shaken and was in a traumatic condition when he was brought out of the crashed vehicle.

He said the former governor was apparently rushing out of the city when his convoy beat the traffic and crashed.

When PREMIUM TIMES arrived at the National Hospital two hours after Mr. Akpabio was admitted at the hospital, a security official said the former governor was at the National Trauma Center.

The source however noted that Mr. Akpabio was later moved to a private section of the hospital for X-ray and other investigations.

At about 10am, PREMIUM TIMES met with the driver to the former governor, simply called David who confirmed the accident.

Mr. David said his boss was in a stable condition but declined to say how the accident happened. He wore a pair of black jeans trouser with a white stripped shirt.

When contacted on the telephone, the Chief Medical Director of the hospital, J. Momoh, said he could not speak on Mr. Akpabio’s case because he had no authorisation from the family.

Mr. Momoh, who argued that it was against medical ethics to speak about a patient on admission, did not however deny that Mr. Akpabio was being treated at the facility.

“I cannot speak about a patient on admission without getting approval from his family. You should therefore excuse me,” Mr. Momoh said.

When reminded that Mr. Akpabio was a public official and Nigerian Senate Minority Leader and not a quiet family man, Mr. Momoh still insisted he could not speak on the matter.

Mr. Udom was driven in a BMW salon car with the number plates covered.

Mr. Akpabio’s Physician, Iniobong Essien, has arrived the National Hospital to oversee the medical treatment of the former governor.