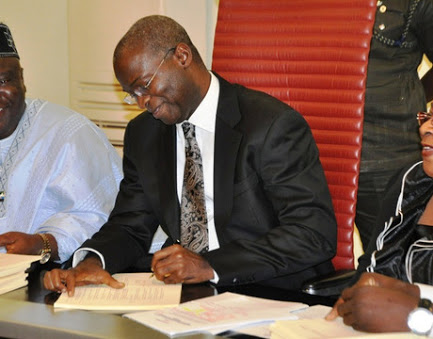 The Lagos State governor, Akinwunmi Ambode, on Wednesday revoked the concession contract for the re-development of the highbrow Falomo Shopping Centre.

Mr. Ambode revealed in a statement signed by his Chief Press Secretary that the Lagos State Development and Property Commission (LSDPC), under his predecessor, Babatunde Fashola, granted Afriland Properties, a 50 year concession contract for the re-development of the shopping mall for a relatively paltry N50 million.

The concession agreement appears yet another case of outrageous contract approved by the former  administration, a week after it became clear that Mr. Fashola spent N78 million state funds to upgrade his personal website.

Mr. Ambode said his government was forced to revoke the contract because it was “grossly detrimental to the interests of the people of the state”.

“State Government as custodian of the interests of Lagosians is committed to the restructuring of the LSDPC to ensure it begins to provide positive capital returns to the State Government for the ultimate benefit of the people,” the statement read.

Mr. Ambode further revealed that he sacked the former Managing Director of the LSDPC, Biodun Oki, to stop the “negative capital return of the corporation”.

The cancellation follows the  revelation of other controversial contracts approved by Mr. Fashola, who had been regarded as one of the best managers of public resources, among Nigeria’s often high spending governors.

According to documents published on the website Lagos State Public Procurement Agency (PPA), Mr. Fashola approved an upgrade of his personal website with N78.3m taken from the state’s treasury.

The document also shows that he approved N15m for toilet facilities in the state’s  Ministry of Justice.

Other expenditure that have caused public outcry are: N61m for the official vehicles of the state’s Chief Judge, N330m for the development of the residence of Fashola’s deputy, Adejoke Orelope-Adefulire, and N94m spent on “printers consumables.”

Mr.Fashola denied spending N78m for the website upgrade. He said only N12m was approved for the upgrade and the balance was used for other services such as the creation of mobile apps.