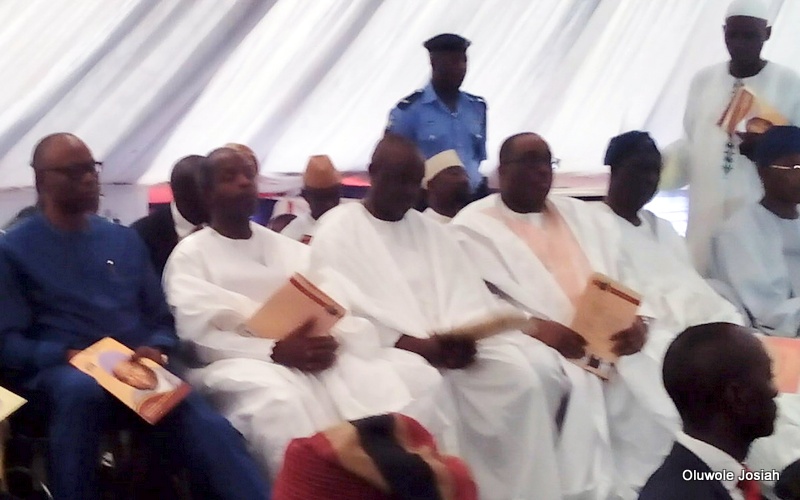 Vice President Yemi Osinbajo and Osun State Governor, Rauf Aregbesola at the Funeral Service for the Ooni of Ife

The Vice President, Yemi Osinbajo, has extolled the virtues of the late Ooni of Ife, Okunade Sijuade Olubuse II, saying his legacies will ever be remembered.

Speaking at the late monarch’s funeral service on Friday in Ile-Ife, the Vice President said the Ife monarch lived a life worthy of commendation and emulation.

“There is no person in Yoruba land that has not heard or felt the works of our father, Oba Sijuade,” he said. “We will always remember his works and legacies. His contributions to the development of the society will live with us for a long time.”

Mr. Osinbajo also prayed for the family of the late monarch and for the sustenance of his good works.

In the same vein, the Governor of Osun State, Rauf Aregbesola, in his condolence message presented to the son of the monarch, Adetokunbo Sijuade, once again, spoke about the message sent to him by the traditional ruler just before seeking medical aid in the United Kingdom.

“Oba Sijuade committed the administration of Osun State to the hands of God before leaving the country,” he said. “The governor said his works and contributions to the state and the country and entire Yoruba land would be remembered for a long time.”

He prayed for the repose of the soul of the late monarch, and for his immediate family to be granted the fortitude to bear the loss.

Delivering his homily, the Bishop of the Anglican Diocese in Ile-Ife, Oluranti Ogubogun, admonished the people of Ife to consider their ways; as whatever has a beginning would come to an end.

He said the late monarch brought fame and popularity to Ife land and affected positively, the lives of many, but his works had ended.

“We are created by God to do good works,” he said, referring to Ephesians 2:20. “Oba Sijuade had gone after doing his own, we are now left to continue to do our own.”

The funeral also featured a Muslim Service with prayers and admonition from Muslim clerics.