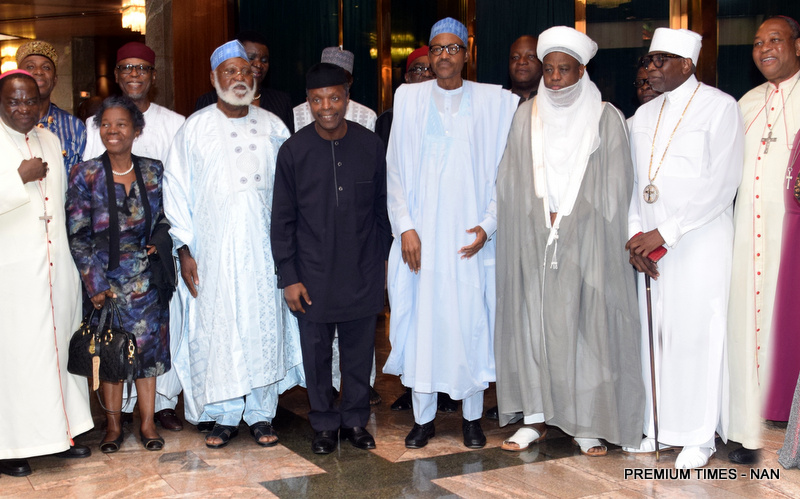 Two days after the National Peace Committee met with President Muhammadu Buhari and cautioned him on the probe of the immediate past administration, the president’s party has risen in his support.

The ruling All Progressives Congress, in seeming reference to the committee members, asked opinion leaders to ensure that their actions and utterances do not give comfort to those who looted the commonwealth of the country.

Some members of the peace committee, headed by former military ruler, Abdulsalam Abubakar, include the Sultan of Sokoto, Sa’ad Abubakar; the President of the Christian Association of Nigeria, Ayo Oritsejafor; and prominent Catholic cleric, Matthew Kukah.

Speaking after the committee met Mr. Buhari, Mr. Kukah said although the leaders were not in support of corruption, they were worried about the process.

“I think what we are concerned about is process,” he said. “It is no longer a military regime and, under our existing laws, everybody is innocent until proven guilty.

“Again, our own commitment is not to intimidate or fight anybody. The former President’s commitment and what he did still remains spectacular and I think that President Buhari himself appreciates that.”

However, on Thursday, the APC, in a statement issued in Lagos by its National Publicity Secretary, Lai Mohammed, warned against any attempt to truncate the ongoing fight against corruption in the country. It expressed total support for President Buhari’s determination to end the scourge in the country.

It appealed to all Nigerians, especially opinion leaders, to ensure that their actions and utterances do not give comfort to those who looted the commonwealth of the country.

“Our party promised Nigerians change, but the change that we promised and which Nigerians desire so much cannot be achieved if we allow the resources that belong to all Nigerians to be appropriated by a few.

“How do we upgrade our decayed infrastructure and provide jobs for our people when the money meant for that has been embezzled by a few?

“President Buhari has promised to break the vicious cycle of corruption that has held Nigeria down.

“How can he do that if he allows those who have looted the treasury to escape justice, and then use their ill-gotten wealth to fight the government?

“How can he do that if he turns a blind eye to the monumental cases of corruption in all sectors?

“We know that fighting corruption in a society where the cankerworm has eaten deep into its fabric will not be easy. We know that corruption will always fight back.

“But there is no other choice than to confront and destroy this monster once and for all, lest it destroys Nigeria,” it said.

The party said the President’s sincerity of purpose could be seen from his statement that any of his party members who was found to be corrupt would not escape justice.

“Therefore, those who are shouting themselves hoarse by saying the Buhari Administration’s fight against corruption is selective or is a distraction, are only seeking to sabotage the epic battle.

“If they have any case of corruption against any member of the APC, they should forward their evidence to the appropriate anti-corruption agency,’’ it said.

The party said that the danger in truncating the fight against corruption was that it would consign Nigeria to poverty, insecurity and unemployment in perpetuity.

“That is why we are restating our unalloyed support for the President, and urging him not to be deterred or distracted by those hiding under sophistry to weaken the fight.

“We are glad that most Nigerians have lent their support to the government’s fight against corruption, going by their interventions on the Social Media, which has now become a people’s parliament of sorts.

“We urge them not to relent in their support, irrespective of the antics of the naysayers,” it said.