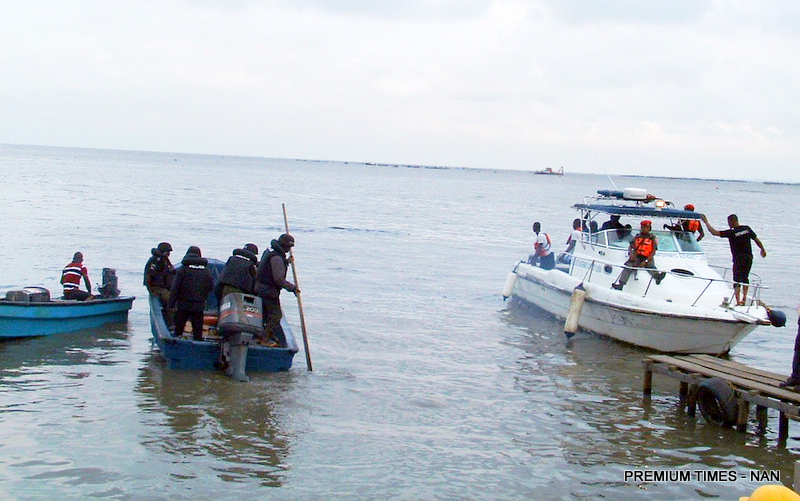 Scene of Helicopter crash in Lagos

Bristow Helicopter Limited on Thursday promised to assist survivors and families of the dead victims of its ill-fated chopper that plunged into the lagoon on Wednesday in Lagos.

Bristow Regional Director for Africa, Duncan Moore, made the pledge in a statement in Lagos.

“Our thoughts are with those affected by the unfortunate accident. We regret the loss of lives in the air crash and we are ready to assist them with our full resources.

“Our highest priority is to take care of our crew and clients and their family members and provide them with any assistance needed.

“Our personnel are currently working to confirm the number of people on board, their identities and the extent of any injury,” he said.

Mr. Moore said the company was fully co-operating with appropriate authorities that were investigating the incident.

“The company is fully cooperating with Nigerian Civil Aviation Authority (NCAA), the Federal Airports Authority of Nigeria, the Accident Investigation Bureau (AIB) and the Nigeria Police.

“Preliminary information indicates that the aircraft carried 10 passengers and a crew of two, subject to confirmation.

“The company is in the process of collecting pertinent information and we will release more details as soon as it is available.

“At this time, the full resources of Bristow Helicopter’s incident response team are being mobilised,” he said.

The AIB had earlier said in a statement on Wednesday that it had commenced investigation on the Bristow helicopter that crashed into the lagoon in Lagos.

The statement said 12 persons were believed to be on board.

The News Agency of Nigeria reports that the helicopter, with tail number 5N-BGD, was involved in an accident at about 3:30 p.m. on approach to the Murtala Muhammed International Airport, Lagos.

The aircraft, a Sikorsky S-76C+, was returning from a drilling rig.

The Public Relation Officer, National Emergency Management Agency, South-West, had earlier confirmed four dead while six survivors have been taken to the hospital and two were still missing.

Two more bodies were later found on Thursday morning from the crash site.