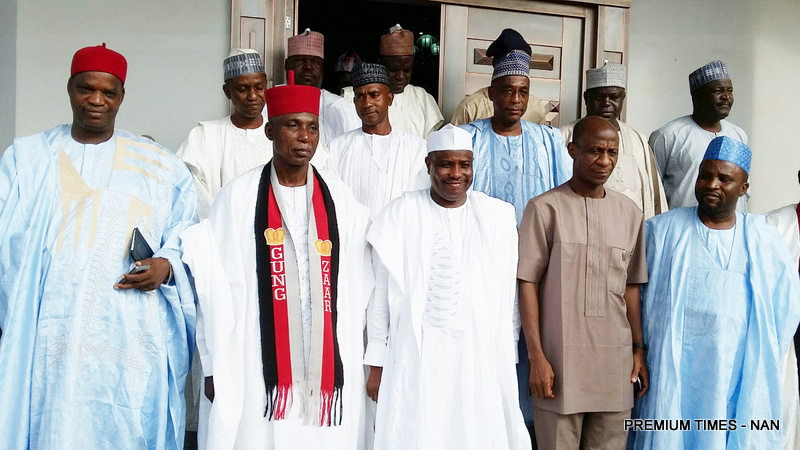 Why I supported Dogara for Speaker — Gov. Tambuwal

The Governor of Sokoto State, Aminu Tambuwal, on Monday admitted to supporting Yakubu Dogara over Femi Gbajabiamila, to clinch the Speakership of the House of Representatives.

Mr. Tambuwal, who is the immediate past Speaker of the House, said Mr. Dogara was more competent and had better leadership skills.

Mr. Dogara is more competent, accommodating and more capable to lead than Mr. Gbajabiamila, Mr. Tambuwal said, and added “sentiments have to be put aside”.

Messrs Dogara won the election to become Speaker the 8th House of Representatives despite stiff opposition from his party, the All Progressives Congress that supported Mr. Gbajabiamila.

Speaking for the first time on his role in the election, Mr. Tambuwal, said “the issue of competence led eight out of 10 members of the body of Principal Officers of the 7th Assembly” to endorse Mr. Dogara.

He said this when leaders of Sayawa Community of Bogoro and Tafawa Balewa Local Government Areas of Bauchi State paid him a “thank you” visit to show appreciation to him for supporting Mr. Dogara to become speaker.

Mr. Tambuwal’s admission has now put to rest speculations on whether he supported Mr. Dogara or played a neutral role during the jostling for the nation’s number four position.

Many had expected Mr. Tambuwal to support Mr. Gbajabiamila’s bid given the Lagos lawmaker’s role in his emergence as Speaker of the 7th Assembly. But ironically, he supported Mr. Dogara who opposed his ambition to become Speaker at the time.

But while explaining the reason for his action, he said, “the survival of the legislature as an important arm of government made it imperative that competent hands are headhunted to be its leaders”.

“Eight out of ten members of the Body of Principal Officers in the last Assembly supported Dogara’s aspiration,” he said. “Only Hon Femi (Gbajabiamila) and Hon Datti Ahmad supported Femi.”

“I have strong affinity with Hon Femi. He was closer to me than Dogara. But when talking about leadership and collective decisions, sentiments have to be put aside. I’m not here to tell you that my support made Dogara the Speaker, no. Two things made Dogara to become the Speaker, one is God and two, Dogara’s competence.

He continued, “The acknowledgement of Dogara’s competence did not start with me. It started from the time of Hon Patricia and Etteh and Hon Dimeji Bankole when they entrusted him with a sensitive position of the Chairman of House Services Committee.

“The committee is one of the most sensitive in the legislature. Apart from taking care of the welfare of members, the committee oversees all procurement processes. As the Speaker, I only did what my predecessors did by giving Dogara this sensitive position.

“No person, as far as I know, has ever served as chairman of the House Services committee in two dispensations. Dogara broke that jinx. All through my tenure, I brought Dogara close to me because I found in him a person who is competent, accommodating, and with capacity to lead.

“Anyone doubting Dogara’s ability to lead, should ask members of the 7th Assembly how he handled their matter. So we supported Dogara not for any reason but because he was competent to deliver on any task given to him.”

In his remarks, the paramount ruler of Sayawa, Gung Zaar (select), Ishaku Komu, thanked Mr. Tambuwal for reviving the age-long relationship between Bauchi and Sokoto States, saying the entire community will forever be grateful for the confidence shown to their kinsman.

Mr. Tambuwal responded, saying, “The relationship between people of Sokoto and Bauchi States was amplified in the First Republic when the first Prime Minister of Nigeria, Abubakar Tafawa Balewa worked in harmony with the leader of his party and then Premier of Northern Nigeria, Sir Ahamdu Bello.”